Beautiful. Articulate. Talented. These are just a few words that can be used to describe the rising TikTok star Mona Swain.

Hailing from Atlanta, Georgia, Mona is a theatrical actress who is also a talented dancer and singer. Ever since she was little, Mona says that she was always told that she had a big personality made for the stage- and that is definitely true! Her big personality and big heart definitely gives "bestie" vibes as Mona gives us a quick glimpse inside of who she is.

The Teen Magazine had the amazing opportunity to get to know Mona in this exclusive interview- read on to learn more about this rising star! Mona Swain is not your ordinary TikTok star. Not only is she a social influencer with more than 1.5 million followers on TikTok and more than 100k followers on Instagram, but she is also a huge social activist. "I feel like I have always been passionate about certain things, that is just the household I grew up in. And so it just came natural to me to talk about things that I am very passionate about, such as civil and social rights," she shares.

Mona has also expressed that she's very much for Roe v. Wade and has spread support for bringing back the 1973 decision that protected women's right to abortion, and has showcased this support throughout all of her social media outlets.

When personally asked about how it would affect her, Mona stated that as a woman, it is her decision on whether she wants to have a baby or not, and that she should at least have that right available, regardless of whether she gets one or not.

"I feel like it takes away from that ability to be young and dumb, you know? I am very sex positive and that decision takes away for us to be that. It doesn't just affect me though, or other people with uterus, and those of different genders. And you kinda just lose the ability to just live your life, as my mom would say. Since the backup plans don't always work." 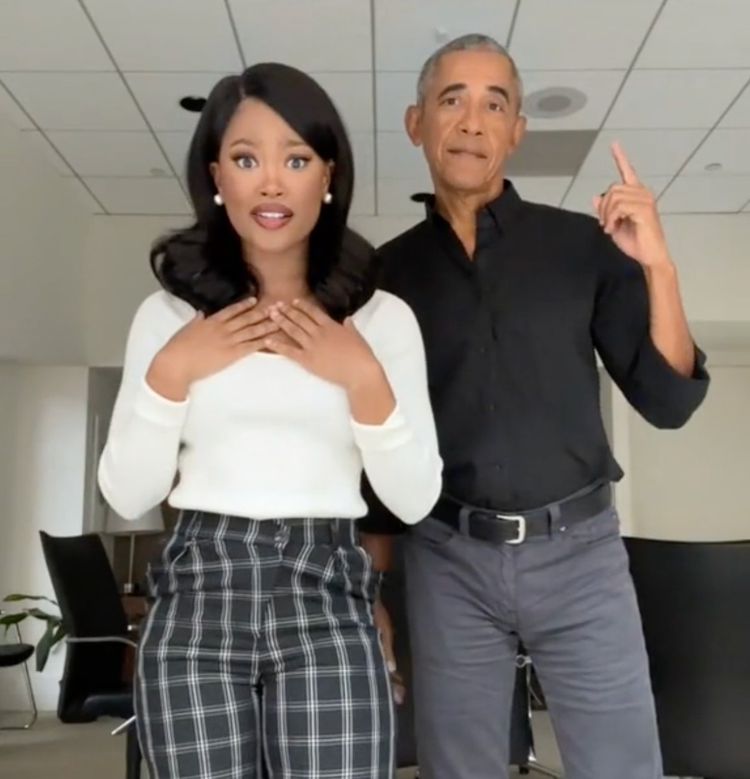 Mona also had the pleasure of meeting Obama and visiting the White House this past year. She was not shy about sharing her thoughts on the beautiful city that is Washington, DC. While she was there for strictly socio-political reasons, she did admit that it wasn't exactly her favorite thing about the day, sharing, "It’s just visually beautiful! And I love visually pleasing buildings. They're just always my favorite thing. And the White House is so gorgeous! Especially considering how old it is; it is definitely in really good shape and taken care of really well."

We were also curious what our favorite activist's top three political issues she thinks need reform are- to which she told us that policing, women's rights, and immigration rights are a few that come straight to mind. Mona also stated that when it comes to being a TikToker and a social activist, they are essentially one in the same, since social activism plays a really huge role in her TikTok career and vice versa. Being A Theatrical Star

It is no secret that Mona is not only a very big social activist, but also a theater "nerd" who loves acting so much that she made it her career!

When asked what exactly got her into acting from the beginning, Mona says, "My mom has always said that I was born an entertainer. I have literally been acting my entire life. I've just always loved acting and being entertaining. I have a passion for performing in general."

Mona also shared that she got into theater specifically because of her love for singing, which all started with her playing Genie in the 5th grade in Aladdin Junior. This experience gave her a genuine feeling of love that she had never experienced before, and she has been in love with theatre performing ever since. Obviously, the next question would be to naturally ask Mona about future endeavors in regards to her career, and what she hopes to do or accomplish. And all Mona had to say in regards to that is that she hopes to someday be able to tell a really great story. One that will inspire others and ultimately create change. She also hopes to win a Tony, Oscar, or Emmy someday. With so many exciting pursuits, Mona did acknowledge some struggles as a busy person. Because she is still working on balancing things out, she usually just passes out because she's used to working so much and forgets to take time off, especially being so young and ambitious during this time of her life.

Mona was extremely humble when asked about whether she would consider herself a role model to others. While she does not think of herself as a role model, Mona expressed her gratitude for the kind words of her followers and supporters who often tell her how much they admire her or look up to her. When it comes to her content, knowing how much they appreciate her makes her feel a lot better! 1) What type of dog do you think you are most like- personality wise?

A miniature poodle, most definitely! They're not high maintenance, not low maintenance but somewhere in the middle and they're super cute!

2) If you were in a comic, do you think you would be a superhero, vigilante, or villain? And why?

A vigilante, because I wouldn’t be the bad guy, but sometimes you do what you have to in order to get the right results. And it's not always the most fun or the most glamorous, but you just have to do the dirty work sometimes.

3) What is your favorite theatre musical?

I hate this question, because there's so many categories and subcategories! But two of my favorite to watch are definitely Little Shop of Horrors and Hairspray!

4) What are five countries you would want to visit someday?

5) What color do you think best describes you?

Magenta, not quite bright pink but not exactly purple either.

6) What are your top three hobbies?

Singing, dancing, and acting with an honorable mention of scrapbooking.

7) Would you rather be wealthy or find true love?

8) What is your favorite Disney musical, if you have one?

Hercules! Easily lol. The songs in Hercules are definitely some of the best in all of Disney.

9) Any other career ventures you hope to do in the future?

I would love to have my own production company later on, definitely produce some theater productions and something for television.

10) Any advice for those who also want to get into theatre?

It's never too late to join the theater!

Keep Up With Mona on Social Media!