The Marvel Cinematic Universe (MCU) has a very special place in my heart. From the moment I watched my first Marvel movie or read my first Marvel comic, I knew I had found a new fandom to be a part of. Besides featuring sarcastic superhumans that dress in tight suits, these Marvel characters have taught me valuable lessons. Here are the ten most important lessons that the Marvel Cinematic Universe has taught its audience across its twenty-three films and 32,000 comics. 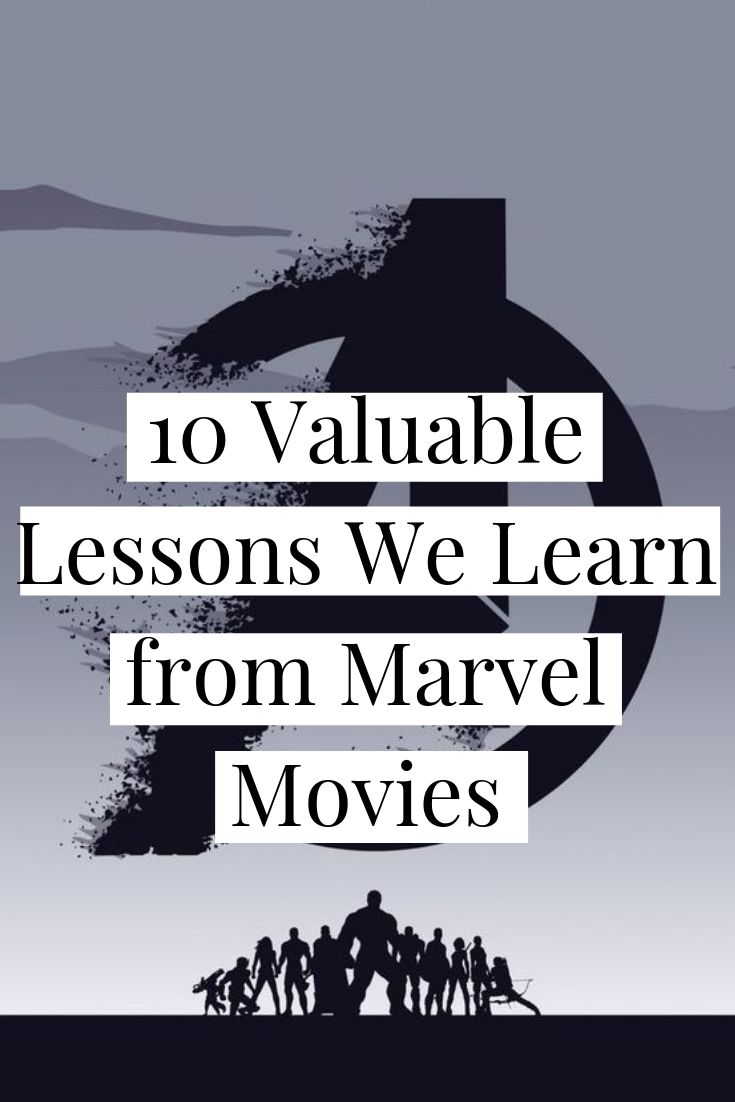 Caution: If you haven't seen Avengers: Endgame, this post may contain minor spoilers! Read at your own risk!

10. Stand Up for What You Believe In

One of the most iconic characters in the MCU is definitely Captain America. Although he could seem like the most "uncool" superhero because of his lack of superpowers, his personality makes up for it.

Steve Rogers always stands up for what he believes in. Even when others don't agree. This was the entire theme of Captain America: Civil War. Tony and Steve both had different views on the subject of the Sokovian Accords. You too should always stand up for what you believe in -- even if it is an unpopular opinion. Besides, it's not like you're going to start a civil war.

Again, there's still more to learn from Captain America. His most iconic line is, "I can do this all day."

This line shows us Cap's reluctance to back down even when he's tired. We may never have to fight the Chitauri or Thanos and his "children", but we have to fight against the urge to give up. Whether we are trying out for the school's sports team or starting a blog, it's important not to give up. We may face difficult times and challenges, but you must persevere.

From the iconic and widely renowned team of the Avengers...

...to the lesser known Guardians of the Galaxy.

All throughout the Marvel Cinematic Universe, the theme of teamwork is repeated. From the very beginning, starting with the film, The Avengers, up until the very last movie, Endgame, has always been about teamwork -- imagine what the Avengers would be like if they decided they no longer needed Thor or Black Widow; imagine if the Guardians decided they didn't need Gamora or Star-Lord!

This teaches us to value our team. Whether it be a group working on a school project or your sports team, value your members. Everyone has an important role to play. That being said, make sure that everyone has a specific role in the team. The Avengers wouldn't be successful if the Hulk stayed on the sidelines. 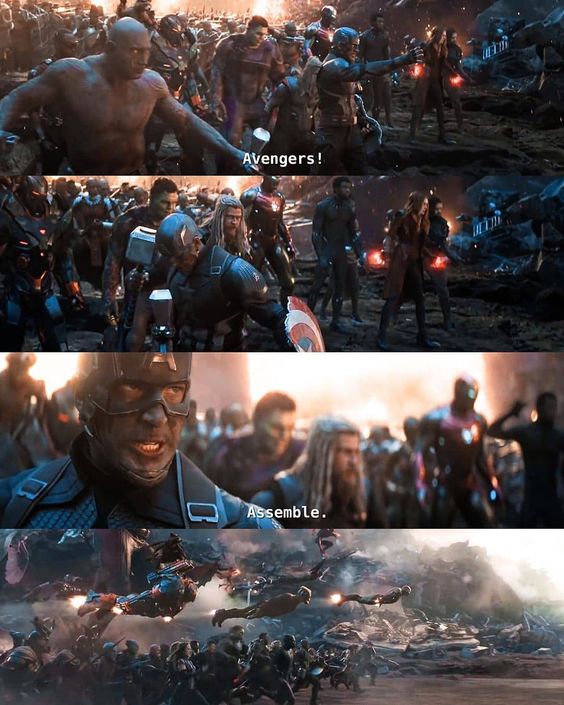 The Avengers wouldn't even be successful if it wasn't for all of them which is exactly what Endgame showed in this epic battle scene. We don't only see one or two people, we see all of them: the Avengers, the Guardians, Captain Marvel, etc. Moral of the story? Work with your team not against them. (In other words, fight like everyone in Endgame, not Civil War.)

As I stated before, because both Steve and Tony disagreed with each other, they fought.

This can happen to us with our friends too. We are all different people with different values and moral standards, so we're bound to disagree some times, but the real value comes from learning to forgive each other. Although Tony and Steve disagreed often, they had to make up in order to save the world. It took them a while to reconcile, but they eventually did and that's what matters.

Your relationship with your friends won't affect the sake of the world, but it does affect your world. Be the bigger person and seek forgiveness.

6. The Past Doesn't Dictate Your Future

We all make mistakes. Including superheroes.

Before Natasha became the Black Widow, she was trained as an assassin by the KGB. The blood of innocent people was in her hands and she felt guilty. Natasha's character arc was one of my favorites because she had to learn to forgive herself and how to let other people in.

You also see this manifested through Ant-Man who has a background as a criminal. Instead of letting his past define him, Scott Lang wants to be the best version of himself for his daughter. Although we probably haven't been trained as assassins, we have all made mistakes in one way or another. We shouldn't let our mistakes define us. Yes, it's important to forgive our friends, but it's also important to forgive ourselves.

There is so much negativity in the world. It's impossible to watch marvel movies without cracking up though. Each character is humorous in their own ways.

Tony Stark has a killer sense of humor.

Thor and Loki are pretty funny too and even Steve has his moments.

In a world where it's so easy to be negative and angry, be the opposite. These heroes were always fighting some form of evil and yet they still found moments to laugh. So take it from them and find something to laugh about.

Peter Parker is a kid from Queens who's still in high school and somehow he's just as useful as everyone else in battle.

It can seem that because we are young, there is not much we can do. People may say that we're useless, but we're not. Remember that even Spider-Man found a way to prove that even if it was at a local scale. We have a unique perspective on things because we are young and inexperienced, but we can use this to our advantage. Don't be afraid to speak up because you're opinions do matter. After all, soon we are going to be the ones in charge.

3. Girls Can Fight Too

This is one of the themes that I am most proud of. Instead of showing that only men can be superheroes, the MCU has included so many strong and powerful women.

From Black Widow and Scarlet Witch...

...to Okoye and Captain Marvel.

But there are so many more... These women aren't there to just be pretty or romantic interests. They're there to fight for what they believe in just like everyone else. You should too. Just because we are females doesn't mean we're weaker or any less powerful. We believe in things that are worth fighting for too.

2. It's What's on the Inside That Counts

Yet another lesson to be learned from Steve Rogers.

Before Steve was a superhero, he was just a kid from Brooklyn. Not only this, but he also had numerous health problems.

Because of his situation, Steve knew humility. He wasn't always a super soldier. This also taught him compassion.

“This is why you were chosen. Because the strong man who has known power all his life, may lose respect for that power, but a weak man knows the value of strength, and knows… compassion.”

We must also remember that appearances don't really matter and neither does physical strength. It's always what's on the inside that counts. To wrap it all up here is the last but certainly not least valuable lesson. It is perhaps the most valuable lesson of all.

My absolute favorite theme of the MCU is this one. Love isn't only about a romantic interest. Steve does love Peggy just as Tony loves Pepper.

Yes, Quill loved Gamora just as Thor loved Jane, but there are other forms of love that are just as important.

There is the love that parents have for their kids.

There is also the love that siblings have for each other. Like the relationship Thor and Loki have or the one Gamora and Nebula grew to have.

Or the love that best friends have.

Love is a theme that has been scattered across the MCU. If Steve didn't love Peggy, he wouldn't have gone back in time to live his life with her. If Scott didn't love Cassie, he may not have felt a need to make sure she was alive. If Nat hadn't loved Clint, she would have never given up her life to spare his.

We too must cultivate a selfless kind of love. There is nothing that is more powerful than love.

Although the Marvel Cinematic Universe may seem like a bunch of goofballs running around dressed in costumes, there really are valuable lessons that can be learned from the characters and their stories. I love the MCU and have learned a lot from its iconic characters.

Make sure to catch the latest addition to the universe, Spider-Man: Far From Home in Theaters July 2. If you loved Avengers Endgame, make sure to watch it again before it's out of theaters! Janelly is currently an 18 year old college freshman. She is working on acquiring her Associates of Science before transferring to a university where she plans to study computer science. Janelly enjoys writing and reading as well as learning new things. Feel free to check out her social media below.