When some people hear the term 'feminist' the first thing that comes to their mind are words such as 'man-hater'. When a feminist vocalizes their opinions, they are often met with hateful comments- simply because it is believed that feminists think that women are superior to men. A shocking amount of people believe that 'feminism' equates 'misandry' when they have two completely different implications.

According to the Merriam Webster Dictionary, the word feminism refers to 'the theory of political, economic, and social equality of the sexes.' However, the word misandry is simply defined as 'a hatred of men'. The definition of feminism does not mention the superiority of women to men: it just means that there is a want for equality. Misandry, on the other hand, demonizes men and almost condones the abuse of men.

This seems simple enough to understand. There is a clear difference between feminism and misandry. So why do people often get so confused?

The main aim of feminism is to get rid of the patriarchy. The patriarchy is a system of society from which males have positions of power in most aspects of the community (such as the family, the school, the law, and the workplace). A common example which most young girls are all too familiar with is the school's dress code: there tend to be stricter dress code rules for girls than there are for boys. Many schools send girls back home if they wear something even slightly against the dress code- some teachers even go far enough to say 'You're distracting the boys.

By enforcing these policies, girls are taught from a young age that the comfort of their male peers is more important and holds more power than the girl's education. This is just one example of the many ways that our society shows individuals that men are more important and powerful than women are.

Because the patriarchy gives men an unfair amount of power, feminists want the power balance to be equal. In a perfect society, men and women would have equal rights. This means that, once this ideal is achieved, men will not have as much unearned power as before. This is where people tend to get confused. A lot of people also assume that feminists focus solely on women's problems and toxic femininity. Toxic femininity is when traits such as empathy, fragility, patience, and tenderness are associated with women and it is when women are expected to uphold these traits in order to be classed 'feminine'.

Not only does it cover personality traits, but women are also supposed to look a certain way: hairless, small yet voluptuous, and conventionally 'beautiful'. This is all done in the name of femininity. Essentially, toxic femininity is when the patriarchy creates an image of the 'perfect woman' and manipulates women worldwide into thinking that they should resemble this ideal. While this is definitely something that feminists are trying to get rid of, they are also working to get rid of toxic masculinity.

Similar to toxic femininity, toxic masculinity is when the patriarchy tries to enforce their beliefs of a 'perfect man' on individuals. For example, men are expected to, physically, be tall and muscular and, personality-wise, are supposed to be strong. Being borderline aggressive and powerful are both considered to be masculine traits, which leads men to suppress their vulnerable emotions.

This takes its toll: suicide is the single biggest killer in the UK for men under the age of 45. This could be down to the fact that it is not considered 'normal' for men to talk about their feelings. Therefore, toxic masculinity is a huge problem, and one that feminists are working to get rid of. However, misandrists only focus on toxic femininity. 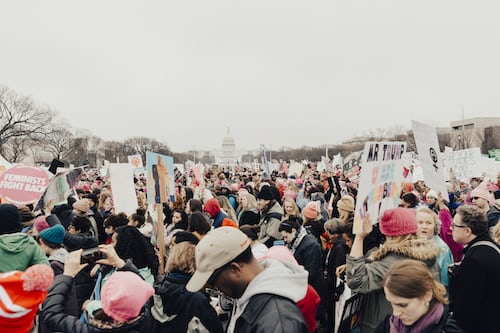 Misandry in the name of feminism

Unfortunately, many misandrists practise misandry in the name of feminism. An example of this is the #killallmen hashtag that was trending in May 2013: so-called feminists were tweeting tweets with this hashtag attached to it. To some people, it was obvious that they were joking and were using the misconception that all feminists are misandrists as an ironic kind of joke.

However, most people were disgusted by this and, according to a poll by the Huffpost in 2013, only 23% of women and 16% of men considered themselves to be feminists. What is interesting is that, in total, 82% of the respondents said that they believed that men and women should be social, political and economic equals.

As we saw from the definition of feminism, this is exactly what feminists are trying to achieve, so feminists share a goal with 82% of the population. But, because of the actions of misandrists, people rarely want to associate themselves with feminism as they believe it to be a damaging cause.

Based on this, it is crucial that people are able to tell the difference between misandry and feminism, but it can be hard to tell when a misandrist is talking. They will rarely call themselves misandrists- they will identify as feminists but there are ways to tell them apart. For example, misandrists will use male-hostile laws to their advantage. They will use phrases such as 'ban men' and 'male tears': both phrases with inherent cruelty. They will never speak up for the men in vulnerable positions.

Feminists, on the other hand, fight for both men's and women's rights.

In conclusion, feminists and misandrists are not fighting for the same cause. Feminists are fighting for gender equality, whereas misandrists are fighting for female superiority. It is therefore impossible to be both a feminist and a misandrist: they are mutually exclusive as it is impossible for men and women to be equal and, at the same time, for women to be superior to men. Despite this, people often get confused between feminism and misandry (including misandrists themselves as they often call themselves feminists) and this shows in the number of people who don't consider themselves a feminist but who also want gender equality. It is important to realise that the actions of certain individuals do not speak for the cause as a whole. You don't have to agree with what certain 'feminists' are doing to support feminism in itself. The patriarchy has negative impacts on all of us, men and women, so we all need to stand together to demolish it.