We are currently in the midst of a pandemic, with almost every country affected. In the United States, things have unfortunately taken a turn for the worst and rapidly increasing cases have left states scrambling for supplies to support healthcare workers. This is an overwhelming time for many of us, but it is important to understand what governments are doing to combat this crisis. So for those of you who are curious about the current climate and what’s going on, here’s a summary of what’s happening regarding supply shortages in the United States:

As cases skyrocket, states have been left with dwindling supplies of personal protective equipment (PPE) as well as ventilators. Hospitals are running into shortages, which could result in doctors having to make harrowing decisions over who gets access to a ventilator and who doesn’t. Andrew Cuomo, governor of New York, said:

“Its like being on eBay with 50 other states bidding on a ventilator. I mean how inefficient. And then, FEMA gets involved! And FEMA starts bidding! And now FEMA is bidding on top of the 50 [states]. So FEMA is driving up the price. What sense does this make?

FEMA, for those of you who don’t know, stands for the Federal Emergency Management Agency and their primary aim is to respond to disasters that occur within the United States that local and state authorities can’t handle. Cuomo describes the fight for ventilators in the aforementioned quote, describing the way that the pandemic has states fighting for, and bidding for, ventilators. Cuomo argues that:

And Cuomo’s not wrong. In creating a situation where states have to bid for supplies, not only is this giving companies power they should not have in a crisis like this, but it is also creating a sense of competition and alienating states from one another.

On a conference call on March 16, Trump told governors that they should try and find the equipment themselves without relying on federal government help. He's quoted saying

"Respirators, ventilators, all of the equipment --try getting it yourselves"

"We will be backing you, but try getting it yourselves. Point of sales, much better, much more direct if you can get it by yourself"

This response has been met with complaints and criticism from governors and civilians alike. Governors such as Andrew Cuomo from New York and Charlie Baker from Massachusetts have both described the difficulties of getting equipment. As the situation gets direr, governors have resorted to appealing directly to President Trump and writing op-eds. The governors of New Jersey and Massachusetts wrote an article for the New York Times near the end of March asking for help. They described how their state resources have been “stretched to the limit” and their economies are on a standstill.

The federal government has sent supplies, although much less than what’s been asked for. On top of that, FEMA has joined in on the bidding wars, which Cuomo mentioned when criticizing the government response. Along with that, a CNN report has stated that, as of March 2020, FEMA hasn’t shipped any of its supply of 2,000 ventilators as they haven’t been asked too and haven’t been given locations. The US defense secretary said on March 17 that the department was ready to distribute the ventilators “as needed”.

However, what’s interesting is that not all states have been left scrambling for help from the government. According to the Washington Post, the Florida governor, Ron DeSantis, has “received 100% of his first two federal requests”. Republican-led states like Kentucky and Oklahoma also received the resources they requested and more while other states do not even get close to what they’ve asked for. This suggests that Trump might be favoring states which could be a potential way to improve his reelection bid. Trump told Fox News that it’s a “two-way street” and states have to “treat us well”. Watch the clip below:

On Governors asking for help, Trump says, "It's a two way street they have to treat us well too." .... (realized i had wrong clip before) pic.twitter.com/gXM83TCUZR

In the article for the Washington Post, a White House official says that Trump knows how important Florida is for his reelection and therefore pays “close attention to what they want”.

What I described above are events from late March, and since then things have changed slightly. New York is being sent a donation of 1,000 ventilators from China, and Oregon is also sending 140 ventilators. However, with the rising cases, this may not be enough, and factories are now beginning to operate at full capacity. However, social distancing is working, and there are many reports showing a slight flattening of the curve in states that were quick to adopt such policies. The director of the National Institute of Allergy and Infectious Diseases said that while there’s been an increase in deaths, there’s a “rather dramatic decrease in the need for hospitalizations”. He encouraged people to continue with social distancing. On the 9th of April, Cuomo announced that New York had its “lowest daily jump in hospitalizations” since the crisis began in the state. Hopefully, this trend continues and the US is able to control the rate of infections. 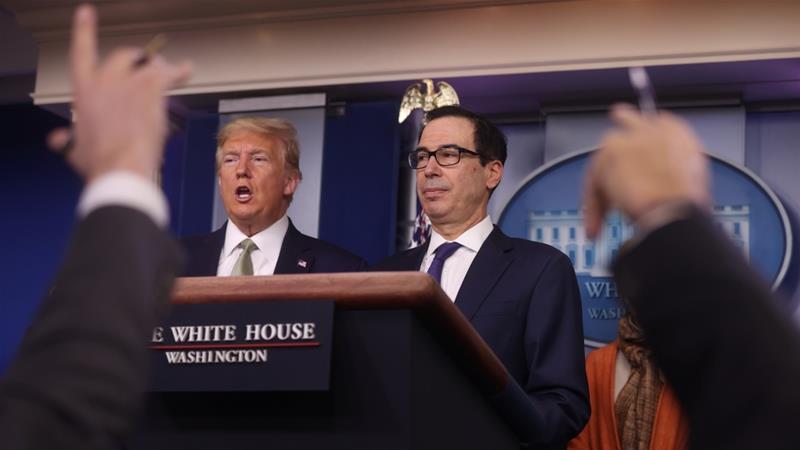 Along with that, the United States has been grappling with when to reopen the economy. Trump faces a difficult decision as he’s being told by financial and economic advisors to reopen the country as soon as possible while medical advisors are urging for a more cautious approach in order to continue to slow down the spread of the virus. Trump’s economic advisors are working to reopen the economy. For instance, the chairman of the national economic council says that he could see the country reopening within the next four to eight weeks. The Treasury Secretary, Steven Mnuchin has said that the US could be open by May. However, health officials are wary of reopening too soon. They argue that reopening too soon could bring in a second wave of the virus. Experts have said extreme lockdown measures are going to stay in place for at least another month or two and really depends on when we can get a vaccine. While Trump and economic advisors initially wanted to reopen the country as soon as possible, this may be easier said than done as the responsibility actually lies in the hands of each governor and not just the President. It’s uncertain when the country will reopen but hopefully, the downward trend continues, and the US is able to control the rate of infections.