Most of you have heard by now about the devastating fires that have been burning in Northern California. Siena and I live three minutes away from where the fires were blazing and have seen friends' homes destroyed and much of our city turn to smoke and ash. People in and out of Sonoma County have come together to help those in need, and this has inspired us to do what we can to help the victims of the California fires.

Here is some footage of what is left of Coffey Park - a community just five minutes away from our houses.

You can donate here.

I started The Teen Magazine a year ago and have been amazed by the support and community amongst our writers, editors, and readers. I'm hoping that by starting a fundraiser on The Teen Magazine to help those affected by the fire, we can really make a difference.

The fire started on Sunday night around 10 p.m. in Napa County. At that time, I was in bed working on a ten-page paper that was due the next day. My mom said she could smell the smoke from the fire, but because it was in Napa and not in Sonoma, we weren’t worried.

Later that night, as I was writing my paper on Pride and Prejudice, my room creaked from the winds. Around 2:00 a.m., I heard a loud bang and sirens, but assumed it was just from a tree falling over, something not uncommon with winds that were hitting 60 MPH. I accidentally fell asleep and was woken up an hour later by my little sister. “There’s a fire!” she urgently called to me, her eyes wide with terror. I could smell the smoke, and my first thought was that the fire was in our house. Panicked, I grabbed my phone and laptop and ran outside where I saw where the fire was coming from. 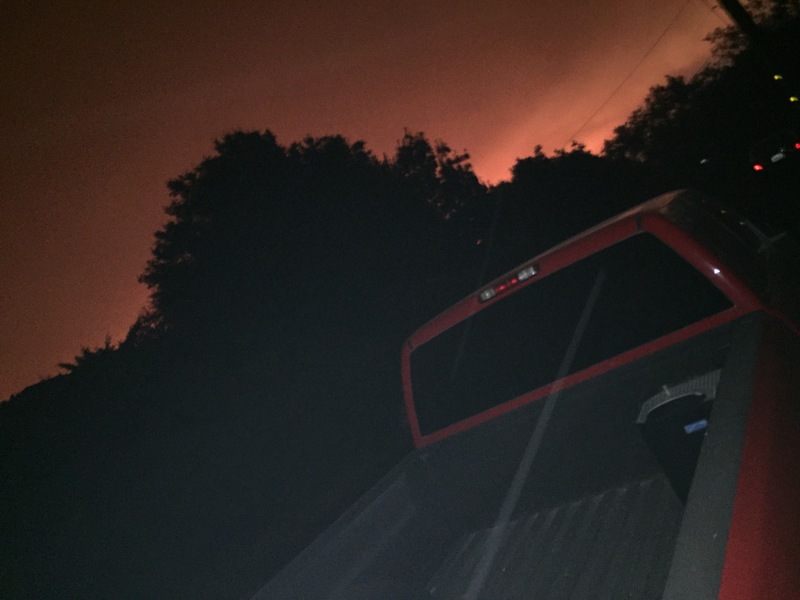 It was unlike anything I’ve ever seen before: the sky was lit up by an orange glow coming from the direction of the cemetery, a block from my house. Later, we found out that what we were seeing was the Atlas fire which burned over 50,000 acres of land. About an hour later, I returned with my mom to get my other cat, and the Tubbs fire, which burned through 35,000 acres and destroyed nearly 3,000 homes, was visible. It was 4:00 in the morning and I had no idea where or how close the fires were.

We evacuated, at first staying with a couple of friends, and then going up to Tahoe to get away from the smoke. All the while, we brought along our dog and two cats in a car packed full of clothes, food, and photo albums.

Over the course of the next week, 90,000 people just like us evacuated their houses to get out of the range of the fire. We were lucky our house remained safe, but thousands of homes were lost, including those of many friends and family. My grandparents, whose house is still at risk in Oakmont, are currently in San Jose with my 100-year-old Aunt who evacuated along with hundreds of other 90+-year-old people. Four thousand people remain in shelters, and many thousands more are staying with friends and family, either because they have lost their homes, or it isn’t yet safe to return.

Santa Rosa is the city I have lived in my entire life, and now much of it is gone or evacuated. With all the hurricanes, natural disasters, and terrorism on the news, it’s easy to become numb to what’s happening, but it’s very different to have it be your reality.

It was 2:15 a.m. on Monday, October 9 when my Dad barged into the back of the house slamming open the door to my sibling's room, and then to my room, yelling, “Get up and grab your stuff girls, the city is on fire.” At the time, it hadn’t occurred to me that when my Dad said, “The city is on fire,” he meant our city, Santa Rosa, so at first, I just went back to sleep. After all, when a natural disaster hits, it's always something which seems to happen to someone else in an area far away from your own.

But five minutes later my door banged open again and that was when the smell of smoke pierced my nose and I realized that the burning community my parents were talking about was Fountaingrove, five minutes from our house. I grabbed my textbooks, electronics, and a handful of clothes before stumbling outside to put it in my car. Cars streamed past our house in a steady line and at the time all I could wonder was where the fire was and if these people had a home left anymore.

Max, my sibling, sobbed while taking a video of our rooms. Then as we took the last of our stuff out and got it into the trunk my parents gestured over at us.  It was 2:45 a.m as we walked over and gave them hugs before they packed us into my car and told me to drive up to Oakmont to meet with my Grandma and stay with her.

As I was driving to the retirement community of Oakmont I saw that the traffic going the other way was bumper to bumper and extended nearly two miles, but Max and I had no traffic and were the only car going in the opposite direction on Highway 12. An orange glow of flames creeping up over the horizon came into view, and we both realized that chances were, Oakmont had been evacuated and the fire was either close by or in the retirement community itself. 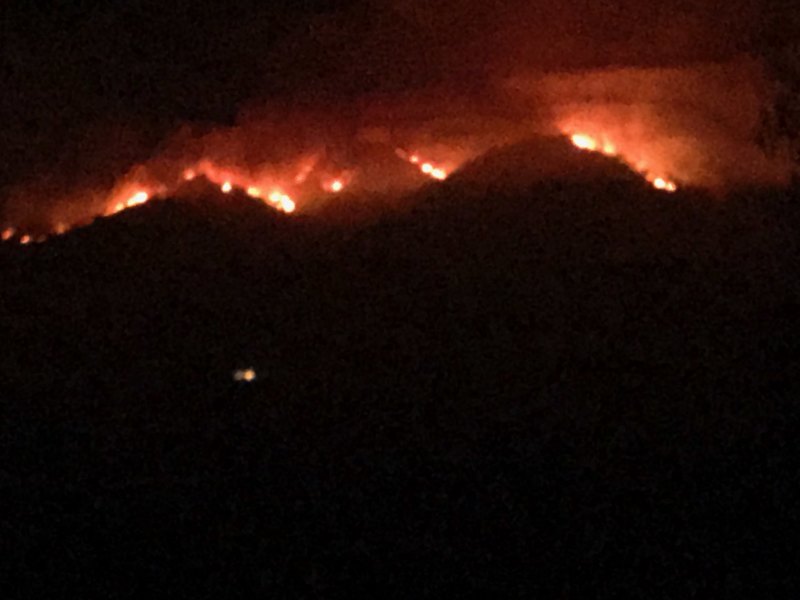 Despite not knowing if we were going into harm's way, I decided to continue driving to Oakmont to make sure our Grandma was either evacuated or in the process of evacuating. It was terrifying; we could see the fire from Highway 12 lighting up the hills of Kenwood. As we looked out the window the sight of fire burning in the crevices of the hills convinced us that we had to make sure our Grandma was safe. 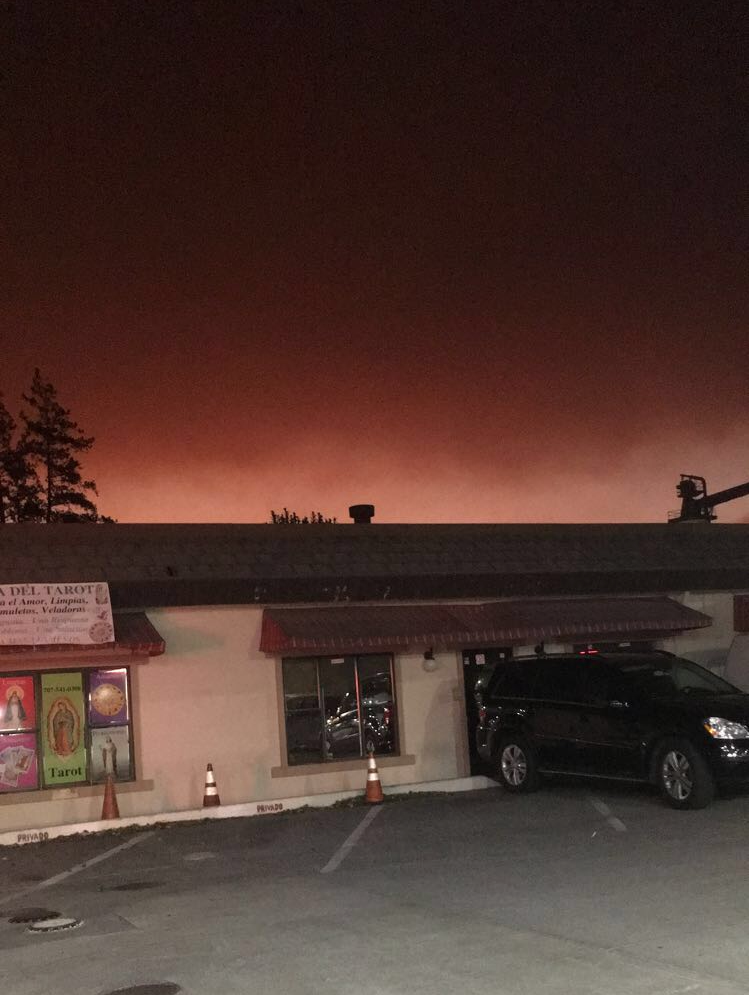 I remember my body feeling completely and utterly numb. It was as though I was incapable of emotional response and all I could think to do was hold tight to Max's hand and say it was okay and we were going somewhere safe despite the fact that it seemed like our entire lives were literally going up in smoke and there was nothing we could do about it.

Finally, we arrived at our Grandma’s house to see that her garage door was open and she had evacuated. This left us with no place to go since we hadn't heard about any of the shelters yet and since the phone lines were down we had lost the ability to contact our parents. We then decided that the best thing to do now was to try to find a place to bunk down for a while since we couldn’t get in contact with anyone.

This led us to drive back to Santa Rosa, and to my dad’s work. I remember it being around 5:00 a.m. when we got there but by this time all I was thinking about was the orange glow and the red line in my phone signaling a low battery. I was exhausted, stressed, and doing my best to not pass out at the wheel.

Then finally, around 6:00 a.m., we were able to contact and meet up with my mom. When we finally saw her all I really wanted to do was cry but I held it together. We met up by her work and drove to Amy’s Kitchen in Rohnert Park where we were finally able to get some food and sleep. By that point, I was practically running on empty and I know that if I had tried to continue driving I would have fallen asleep at the wheel.

So there we stayed in the parking lot of Amy's Drive Through for the next five to six hours before deciding to head to the Santa Rosa Fairgrounds which is across the street from the Veteran's Building. It was there that I found our Grandma while we stayed and helped with the volunteer set up for the next couple hours.

Around 6:00 PM, we went back home despite our neighborhood having mostly evacuated. We were under an advisory evacuation order and my mom decided that it was better to sleep at home if we had the ability. So once again we packed everything up into our cars and drove back home where we have been since late last Monday.

It was a stressful and frightening time not knowing if our house was still standing or not, but because of the bravery of the firefighters, police officers, and members of the National Guard, the fires were pushed back and a week later is in the process of being fully contained.

The damage, however, is evident as you drive through our city. Several of my friends have lost their homes and all they hold dear. It will take several years to recover from this horrific natural disaster, and we will need all the help we can get. 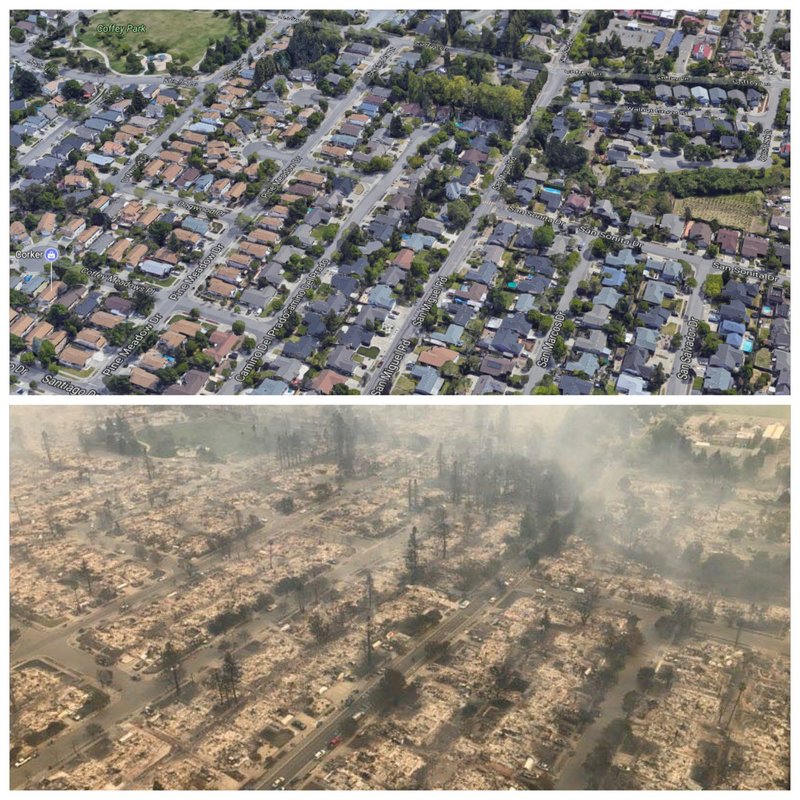 Images: Before and After of the Coffey Park Neighborhood

How You Can Help Siena is currently a college student who is majoring in Political Science. She is an avid reader of international news and books concerning the history of the Middle East and 15th century China. Siena enjoys drinking excessive amounts of caffeine and practicing martial arts.