Denmark, Finland, Germany, Taiwan, Norway and New Zealand are amongst the few countries who have had an excellent COVID-19 response. All these countries have one thing in common: female leaders. Could it be that female leaders are better at handling and controlling emergencies?

How are female leaders handling the pandemic?

The media has praised these countries' leaders for their excellent handling of the virus. This praise is justified. Although women make up less than 7% of leaders, four out of the top ten best-performing countries during the virus outbreak are led by women. Notably, as of June 3, New Zealand's Prime Minister Jacinda Ardern has managed to completely eradicate the virus, with just one active case. This is a milestone most countries have yet to reach.

New Zealand’s prime minister has suggested employers consider a four-day working week as a way to boost tourism and help employees address persistent work/life balance issues. In a Facebook live video, @jacindaardern said people had suggested everything from the shorter work week to more public holidays as a means to stimulate the economy and encourage domestic tourism, while the borders remain closed to foreign nationals. Would you opt for a four-day work week?

Not only are women leaders thriving during this pandemic, but leaders who fall under the category of "traditional leaders" make up the worst performing countries.

Borris Johnson, the UK's Prime Minister, has made openly derogatory and contemptuous remarks about women. Signficantly, the proliferation of the virus has been notably high in the UK; in fact, they have the highest death rates in Europe. Additionally, Donald Trump, the President of the United Staates, has blantly sexualized women in a disparaging way; the United States has the highest death rates globally.

What does this mean about leadership today?

This stark contrast in the way of responses between female-led and male-led countries indicates that what we consider traditional leadership may not be as effective as we once thought. We can see that more progressive societies that have embraced women in leadership are proving to be more efficacious in their handling of a crisis. This undoubtedly proves that it is time that the barriers of inequality in leadership falsify, as we can see through the responsiveness of female-run countries in this crisis.

New leadership is interconnected with a new approach at dealing with imminent threat. The new female faces of leadership are exhibiting excellent receptivness and response to the virus.

The significance of being a woman in leadership:

In considering these facts, the question arises of why these female-led countries have had such an effective response. All these women leaders took precocious measures in attempt to control the spread of the virus. And they have succesfully done so. Could it be that female leaders share specific traits that have acted conducively to their handling of the virus?

Indisputably, all these women have one thing in common; they beat the odds to get to their current positions. In our patriarchal society, women hold less power, starting at conception.

Evidently, a recent study asked both men and women to identify a leader they admire and 80% picked a man. Dr. Abbie Griffith Oliver, assistant professor at the J. Mack Robinson College of Business at Georgia State University, researches how people respond to female leaders. This mere statistic delineates how people do not view women as leaders. The fact that these women have been elected to lead their countries demonstrates just how assiduous they are.

How hard female leaders work is reflected in their handling of the pandemic. They have not ignored the problem infront of them; instead, they are taking initiative and measures not only to eliminate the daily cases but to eradicate the virus completely. They have been restless in taking advice from medical professionals, deciding on the appropriate measures needed to be taken and hence, not risking the health of their country's citizens.

Emotional intelligence is an attribute female leaders have always exhibited. More now than ever, the importance of leaders showing sympathy to the country's population is highlighted.

Norway's Prime Minister Erna Solberg went live on March 16 to address the children of the nation in attempt to calm their fears and answer their questions regarding the tumult that has overtaken their lives. Danish Prime Minister Mette Frederiksen held a conference on the same day to appropriately inform the children of her country of the current situation. 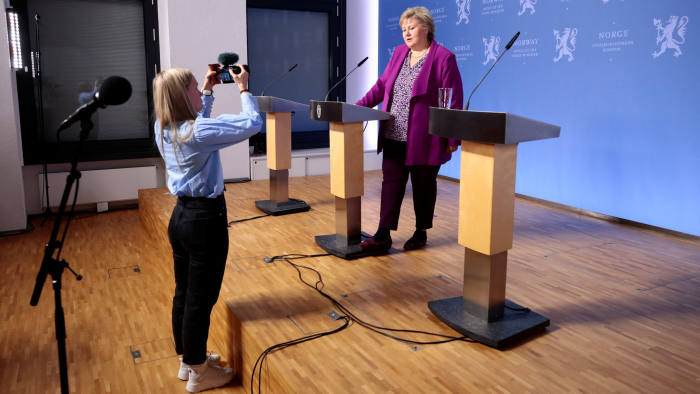 In reaching out through social media and interviews, female leaders are initiating a relationship with the people of their country. This empathetic and sympathetic attitude of women leaders has been vital in unifying people during a turbulent crisis.

Taking matters into their own hands

A study at a Canadian university revealed that female directors are more likely to probe and ask questions and challenge the status quo rather than nodding through decisons. This has been made conspicuous during the global pandemic. This clarity in decision-making stem from the prejudice women in leadership have undergone have resulted in better educated decisions.

Angela Merkel, the chancellor of Germany, epitomises this caution and responsibility in decision-making during the COVID-19 crisis. Merkel is a prime example of prioritizing common-wealth above personal and financial gain. All of her decisions have had substantial scientifical foundation, being one of the first leaders to endorse wide-spread testing and prompting Germany to remain calm.

Since women only make up 7% of world leaders, it is impossible for there to be a statistical comparison of the response of male and female leaders. However, it is irrefutable that women leaders have done an outstanding job at handling the COVID-19 crisis. So, why aren't there more of them?