It's almost one of everybody's new years resolutions: eat healthier. But are the healthy foods you're actually eating healthy at all? Maybe not! Here are 10 foods that look and sound healthy, but they aren't that healthy at all! Comment other ideas! These so-called "healthy chips" are more unhealthy than you think! Deep-fried with other unknown things (such as salt and sometimes some added potassium!) don't make these sliced bananas any healthier. If you're thinking of buying these or any other fruit chips, stick with the real thing! In fact, one ounce of these chips contains about 150 calories while a banana only contains about 105. Stick with some real fruit! These sugary and high-calorie bars are no match for their regular granola bar counterpart. Although they may give you some energy every once in a while, overall, they're just bars packed with sugar and chemicals. Protein bars are often filled with artificial sweeteners, corn syrup, and TONS of trans fat. Grab a granola bar with the real stuff instead! However, eating one of them before a big game won't hurt, instead look for the bars with lower amounts of sugar and the bars with less than 200 calories. 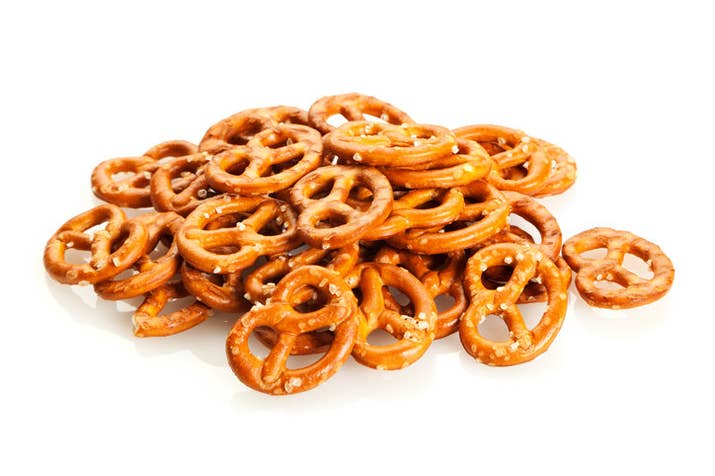 Pretzels are lower in calories than a bag of chips, but overall, they're still made out of the same processed and refined flours and whatnot. Especially watch out for yogurt-covered ones! They may taste like sweet yogurt, but you never know how long that "yogurt" has been sitting out for, and what actually goes in it. Again, eating pretzels in moderation is fine, but they aren't exactly as healthy as you think they are.

This popular breakfast staple is less healthy than most people think. Instead of biscuits smothered with gravy or fried bacon, most pick out cereal and say they had a healthy breakfast. Think again! How did we get those cute corn flakes in its form? Cereal (especially ones with corn and fruit) is stripped of its vitamins and nutrients when we add those chemicals and sugars to help lengthen shelf life and taste. You can make your own healthy cereal at home! Grab some homemade granola with some fresh fruit, and add some soy milk for a healthy alternative.

Yes, it's healthier than that candy bar you wanted to eat. But they don't flavor the yogurt the way you really want them to. Most companies flavor their yogurt with extra added sugars and artificial flavorings. If you're looking for some good tasting yogurt, flavor it yourself with some fresh fruit and plain yogurt! Add it according to your taste, and you'll feel better about eating it.