Sometime in the past few years, you've probably downloaded TikTok: an app dedicated to the creation of short videos with an algorithm almost as unpredictable as whether respect for Trisha Paytas is going 📈or 📉 today. Maybe you downloaded it shamefully, or maybe you did it simply to see what all the fuss was about during quarantine.

However you came upon TikTok, on November 3rd and the days surrounding it everyone on the app was abuzz with talk on the US Presidential Elections. Between all the arguments of the left, the right, and Gen Z’s trademark sarcasm, it may be hard to separate fact and fallacy for those who use the app as their sole source of information or use the cold face emoji without a hint of irony. In this article, we will be setting the record straight on Kamala Harris, the other half of the 2020 Democratic presidential ticket and the Vice President-elect of the United States of America.

Kamala Devi Harris was born on 20 October 1964 in Oakland, California, to the Jamaican economics professor Donald J. Harris and Indian cancer researcher Shyamala Gopalan. The couple had their second daughter Maya in 1967, then divorced when Kamala was 7. Kamala was raised in San Francisco’s East Bay with both Christian and Hindu practices, then moved with her mother and sister to Montreal after Shyamala received offers for teaching and research jobs there. At the age of only 13, Kamala proved that she possessed strong leadership qualities when she and her sister led a successful demonstration in front of their residence to protest their building owner’s banning children from playing on the lawn. Kamala now tells the world:

“You never have to ask anyone permission to lead. I want you to remember that, OK? When you want to lead, you lead.”

In Canada, she studied at Westmount High School, then returned to the United States to double major in political science and economics as a part of Howard University’s Class of 1986. She subsequently received a law degree at the University of California, Hastings College of the Law, in 1989. In 2014, she married fellow lawyer Douglas Emhoff.

Her family was initially doubtful of her plan to become a prosecutor, as those in that line of work had garnered bad reputations, but she had told them she planned to “change the system from the inside.” 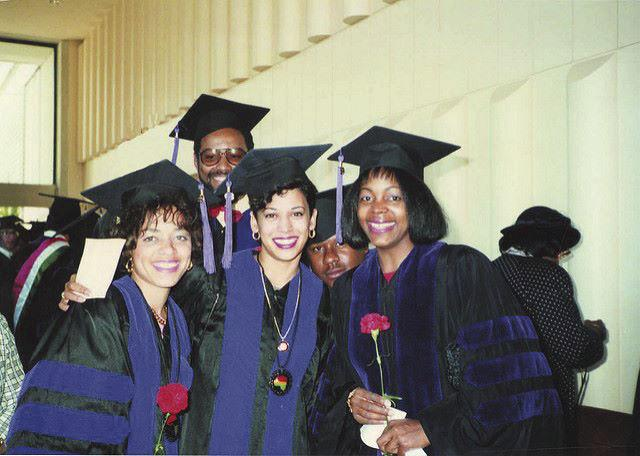 After graduating from law school, Kamala worked as a deputy district attorney in Oakland from 1990 to 1998, where she prosecuted cases involving murder, gang violence, and sexual assault. From 1998 to 2000, she took on cases of serial offenders as the managing attorney of the Career Criminal Unit in the district attorney’s office, then led the San Francisco City Attorney’s Division on Families and Children from 2001 to 2003. She served as San Francisco’s district attorney from 2004 to 2011 and started “Back on Track”, an initiative that reduced recidivism by offering job and educational opportunities for low-level felons, then worked as California’s first female and first African American attorney general from 2011 to 2017.

From 2017 to 2020, she was the second African American woman and first Indian American to serve as a member of the US Senate, protecting women’s reproductive rights and calling for an increase in the minimum wage. As we can see, Kamala isn’t afraid to do what’s never been done before, saying:

“Our country has sent you a clear message: dream with ambition, lead with conviction and see yourselves in a way that others may not simply because they’ve never seen it before.”

Bumps Along the Way

Of course, there is no such thing as a perfect career, and Kamala is no exception. For example, she was accused of being inconsistent after refusing to inflict the death penalty upon David Hill, the man who murdered Officer Isaac Espinoza with a rifle in 2004, then declining the opportunity to support initiatives to ban capital punishment. A larger bump along Kamala’s career path, however, occurred in 2010: she was under fire for her failure to tell defense attorneys that a particular technician tainted evidence after stealing cocaine from a crime lab despite rules regarding disclosure, which led to the dismissal of about a thousand drug-related cases. These bumps, however, did little to prevent her from building a strong and adept reputation. In 2017, Kamala went viral for her questioning of the then-attorney general, Jeff Sessions, at his testimony for the State Intelligence Committee. The fast pace of her questions led to his saying, “I’m not able to be rushed this fast. It makes me nervous.”

In 2018, she went viral again for her similar questioning style in Supreme Court nominee Brett Kavanaugh’s sexual assault case, speaking to him about abortion laws. Regarding this case, President Donald Trump said, “She was nasty to a level that was just a horrible thing.”

A third time she went viral was when she clashed with Joe Biden regarding his opposition to federal busing for school integration in the 1970s and 1980s.

“There was a little girl in California who was a part of the second class to integrate her public schools and she was bused to school every day. And that little girl was me.”

In August 2020, Joe Biden, the Democratic Party’s official presidential nominee, selected Kamala Harris as his running mate. Besides her competence, this selection may be seen as Biden’s attempt at racial and gender inclusion following the Black Lives Matter movement, as well as a show of his willingness and ability to listen to and cooperate with those who don’t agree with him. Biden expressed his complete faith in Kamala’s abilities with a post on Instagram:

The Biden-Harris ticket's victory prompted an international wave of celebration, and soon became a phenomenon unparalleled in enthusiasm. Proponents of Biden and Harris took to the streets to celebrate, with videos surfacing from major cities where people were gathered on street corners with pride flags and Biden-Harris pins.

In her vice presidential victory speech on 7 November, Kamala stepped into her trailblazing role as the first woman Vice President of the United States.

“[Biden] had the audacity to break one of the most substantial barriers that exists in our country and select a woman as his Vice President. But while I may be the first woman in this office, I won’t be the last.” Did you enjoy reading Meg Pio de Roda's article? Let your friends know by using any of the sharing options below.

Meg Pio de Roda is a sophomore in a Philippine high school and is especially interested in the fields of economics, environment, philosophy, and politics. In her free time, she enjoys writing, leading her school’s badminton varsity, and discovering volunteer opportunities in her neighbourhood.