Even if you haven’t watched Encanto, I'm sure you have probably heard the name “Bruno”, or the phrase “We don’t talk about Bruno”, or “The Madrigals”, or something along these lines. Now, if you haven’t watched the movie, then I’m sure this sounds like a thing that a person suffering from severe lack of sleep would say, but Encanto is a real thing and a great one too. It is Disney’s newest movie, and it has become the newest thing that is enthralling people left and right. Why? Why, because of the colourful characters, the ear-wormy tunes, the infectious, socially awkward humour, and Bruno.

Here’s my review on Encanto, the movie about people who don’t talk, but sing about Bruno. And don’t worry, if you don’t know who Bruno is, you’ll know after reading this. Or better yet, watch the movie. Trust me, it’s awesome, and you’ll probably need to watch it anyway, because everyone has, and we are sheeples :) 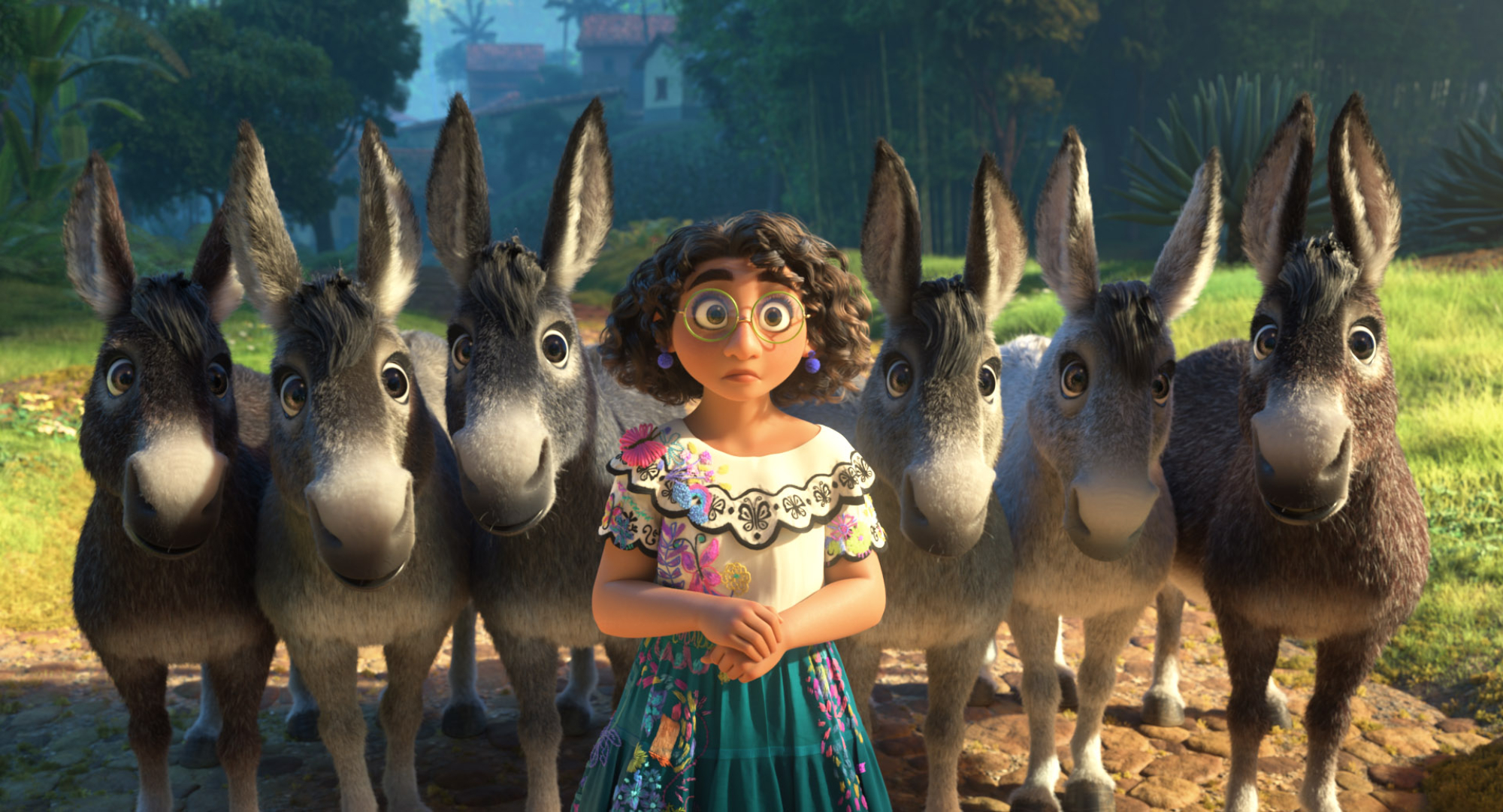 Thoughts on The Movie

I clicked on this movie randomly, on an extremely boring Sunday, for my little brother, but the thing I didn’t realise was that Encanto would become the centre of all our discussions after that. No really, I can't stop talking about this movie.

The plot of the movie is like most Disney movies - a character faces problems, starts crying, finds a magic candle, and BAM! They get a whole family of people with cool magic powers and the ability to save the Titanic from the iceberg. Okay, so it is a bit different. There is no creepy prince, who randomly wanders in forests and around towers, and discovers sleeping or dead women! But other than that, it’s just another magical family movie. So what is the difference between this and other Disney movies with families in them? The answer is everything.

So, first of all, you meet a few people from the Madrigal family. Yes, the family’s name is Madrigal, not Encanto. Encanto simply means charm or enchantment. Now, the Madrigal family has a lot of people. There is the head, Abuela, her two daughters, Julieta, who can heal anything with her food, Pepa, who can control the weather, and her son, Bruno, who is a seer, but we don’t talk about him. Then there are the three kids of Julieta, Isabella (the "Miss Perfect" of the family), Luisa (the strong one), and Mirabel - the 15-year-old protagonist and the only one without a gift. We also have their cousins, Pepa’s kids - Camilo, a 15-year-old shapeshifter, Dolores, who has super hearing, and Antonio, who can talk to animals.

This is one thing that I really like about the movie. Instead of having 2-3 primary characters, Encanto has a dozen. This was one thing Lin-Manuel Miranda had to fight for with Disney Animation. In turn, Encanto was the "hardest film" to date for heads of animation Renato dos Anjos and Kira Lehtomaki because they were asked to fully develop a dozen characters, as opposed to other animated films which primarily feature two or three characters out of a large cast. But this also helps to give the movie more character, because there are a lot of characters to give character to (see what I did there?).

Another thing that makes this movie a must-watch is Mirabel’s sisters singing in the movie, and each song being a cathartic release for them, telling Mirabel how everything isn’t how it seems. In the beginning, we see that she feels as if she has the worst of the lot, and her siblings are better than her, but as the movie moves forward, we get confessions from her sisters, Luisa (Surface Pressure), and Isabella (What Else Can I do), that tell us how they actually feel under the fake images they have made for themselves, and Mirabel helps them blossom into their true, imperfect selves. The love-hate relationship between Isabella and Mirabel is also a terrific addition to the movie, the ways they subtly irritate each other being relatable to most people with siblings.

Also, the diversity in the movie is something that you see in Disney movies these days, and I find that great! I grew up watching white princesses like Belle, Aurora, and Cinderella, wondering why I looked so different from them. Seeing people who don’t have skin as white as snow on screens is something that means a lot to me because it makes me feel included, and less like an outsider.

To sum it all, Encanto is about family dysfunction, intergenerational trauma, and how communication is an important aspect for a family to function like a well-oiled machine. We can't choose to whom we are born, but in the end, it’s the love for each other that matters. Sometimes, we are so invested in seeming perfect to the world that we forget what it is to be human. Encanto wonderfully depicts what Leo Tolstoy meant by the opening line of Anna Karenina - “Happy families are all alike; every unhappy family is unhappy in its own way.” We should not leave issues unspoken and ignored, because that only leads to the blossoming of ten more problems, and life is already complicated enough without having a whole bunch of extra Catch-22s to solve.

Although I don’t think anybody predicted that we would fall in love with an extremely out of sync, magical, not to mention, fictional, Colombian family, Disney proved us otherwise. If I have to choose my most loved characters out of the movie, well…let’s say it’s not the easiest thing in the world for me.

I love all the characters with the whole of my heart, but if I had to choose my favourites, they would be Bruno, Mirabel, Camilo, and Mariano. Yeah, I have a penchant for the awkward characters in movies, but you can't deny that all of them have extremely lovable personalities, not to mention that they are fiercely loyal. I would say Bruno is probably my favourite, because of his quiet, shy, comical personality. He is also the most selfless out of the Madrigals, sacrificing his reputation and disappearing to save his niece, Mirabel, from being ostracised and treated the same way he was.

One of the main reasons that Encanto was so well received was because of its insanely catchy songs that have broken multiple records in a matter of months.

"We Don't Talk About Bruno” (yes, the same one everyone is singing, extremely ignorant person!), the runaway hit from the movie hit number 1 on the Billboard 100 Charts and is only the second Disney song to achieve this, the previous one being "A Whole New World" from Aladdin 29 years ago. It broke the all-time record for the most credited singers (seven) on a Hot 100 chart-topper and is the studio's first-ever original song to top the UK Singles Chart. It has also been certified platinum in the United States. Well, humph, not surprised. It’s a bop, and I can’t stop singing it still. Check out the song on YT by clicking the picture below!

Other than “We Don't Talk About Bruno”, we also have some other amazing songs by Lin-Manuel Miranda and the cast of Encanto- the Oscars-nominated “Dos Oruguitas”, “Surface Pressure”, “What Else Can I Do”, and “All Of You” (my second favourite:).

“Encanto” is an emotional rollercoaster, one which taught us a lot while we rode with it. Most of the time, what we think about a person is wrong, and we shouldn’t judge someone if we haven’t stood in their shoes. No one is wholly right or wrong, all of us are imperfect. We are “caterpillars", we have to grow apart and come back. Forward we will continue, finding miracles, breaking chrysalises. We have to fly away and find our own future because no one can do it for us.

And remember, we never, ever talk about BRUNO. We can sing about him though!

Sarah is a 14 year old entrepreuner, podcaster, writer, and producer. She founded a media production company called TriPod Media in 2020, which produces two podcasts, Word Affinity and Storytime With Kabeer. She also has a blog and hosts The Word Affinity Podcast weekly. She's an "introverted extrovert", who likes dystopian fiction, money, Harry Potter, Apple, Doestovysky, and certain 1900's Judies. You'll most likely find her in a school hallway, with her nose in a book, about to crash into a teacher holding a full cup of tea :)