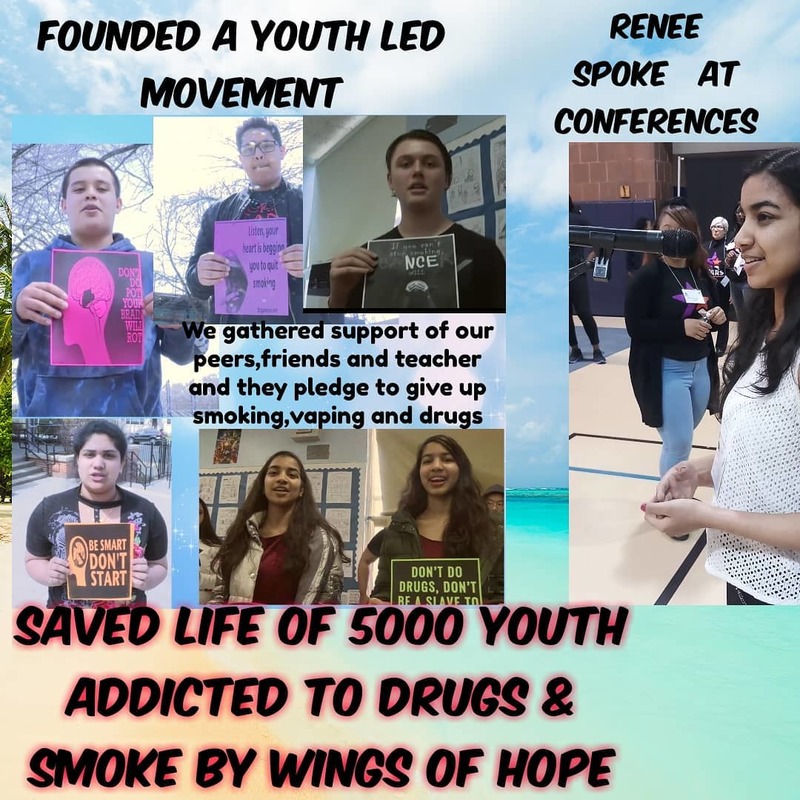 The death of our 17-year-old- Instagram friend from the Bronx has sent shock waves in America.

We tried advising him several times to give up vaping, but he found it very difficult to fight his addiction. He contacted our organization, Wings of Hope, two months before he died. By then the disease had taken full control over his body.  He shared with us in a letter that suddenly he felt like a 100-year-old man with no strength in his body. He struggled to climb the steps in his school and often collapsed due to breathlessness. We feel very guilty we could not save his life. 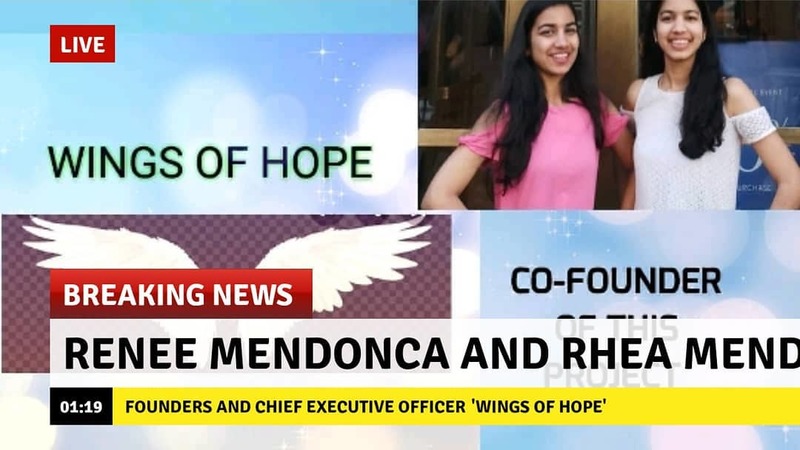 My twin sister and I Co-Founded WINGS OF HOPE, a youth-led organization helping youth addicted to vaping. The youth can write a secret letter and share the trauma they are facing and ask the help they require through our Instagram Page @wings_ofhope. Wings of hope Instagram

To date we have helped 1,00,000 youth addicted to vaping from all over the globe such as the USA, India, Pakistan, Sri Lanka, South Africa, Kenya, Malawi, America, Mexico, Nigeria, Haiti, Columbia. 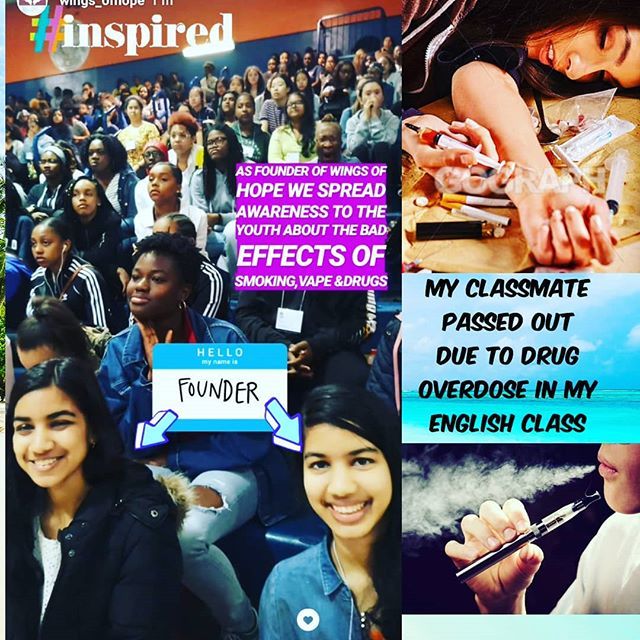 This year a Damocles Sword hung over our birthday. In memory of our 17-year-old Instagram friend, we traded our birthday presents to save lives of youth due to vaping. We asked all my family and friends to donate to our favorite charity, St Jude Hospital, as my BIRTHDAY GIFT. We felt truly blessed to celebrate our birthday - FOR A WORTHY CAUSE BIGGER THAN OURSELVES. 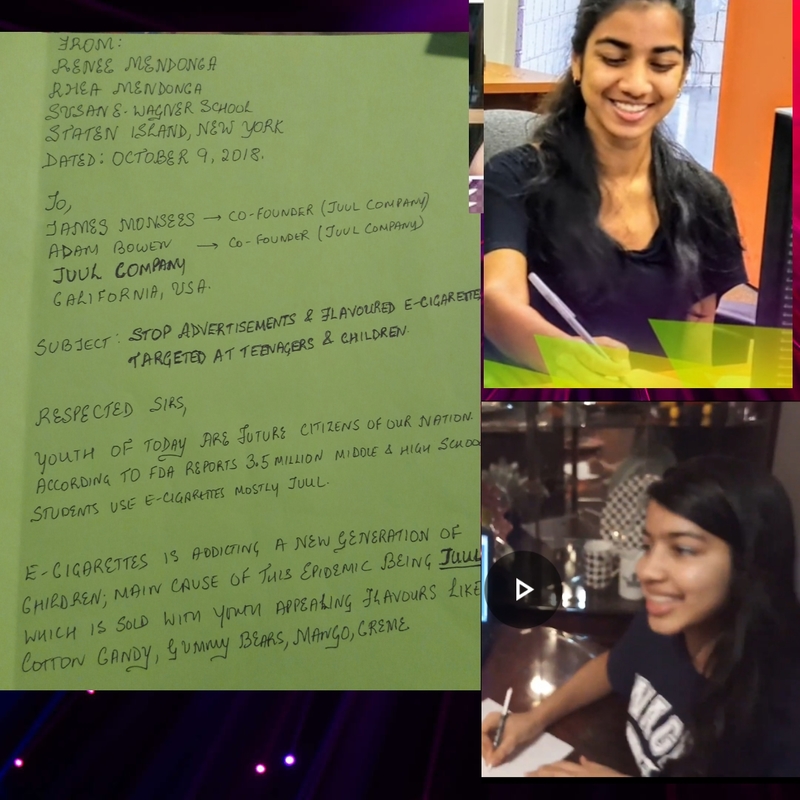 But we felt that we could not remain silent anymore and watch our friends and peers die prematurely due to vaping. This triggered us to write letters to PRESIDENT TRUMP, GOVERNORS OF 50 STATES, and E-CIGARETTE COMPANY, JUUL to stop Flavoured E-Cigarettes in America.

We realized due to the magnitude of our actions, at the age of 15, it had created a SNOWBALL EFFECT. It was our Eureka moment.

How can you get involved?

How serious of a problem is this?

90% of middle and high school students admitted that they prefer using JUUL as a first choice product because of youth appealing flavors like GUMMY BEARS, COTTON CANDY, MANGO, CRÈME. Besides they have said it is easy to hide JUUL since it is a sleek device that resembles a USB. This makes it easy for them to vape without being caught by their parents and teachers.

E-Cigarette companies are using fruit and dessert flavored pods to entice and hook underage teenagers to NICOTINE. 55% of content used in advertisements by E-Cigarette Companies is youth appealing such as memes, cartoons, and pop music.

When we conducted a survey, we found 85% of students from ages 12-17 years are hooked on to flavored E-Cigarettes. 97% of students admitted to using flavored e-cigarettes as the 1st tobacco product. This is a very dangerous trend and the numbers are alarming. Our classrooms and schools are transformed into vaping dens. 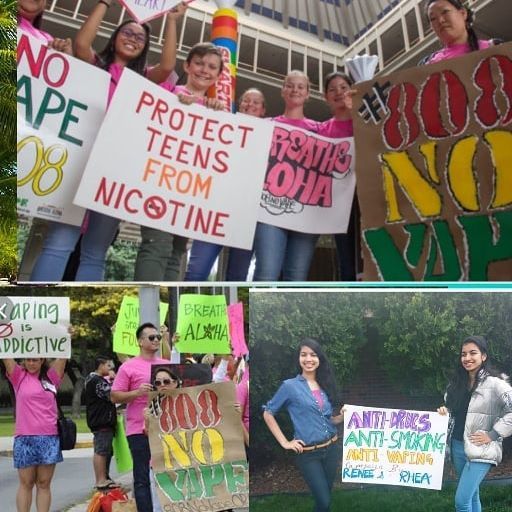 How does vaping affect your health?

Recently a 17-year-old teenager who was admitted to ICU was found to have the lungs of a 70-year-old due to VAPING for 1 year. Isn’t it shocking? 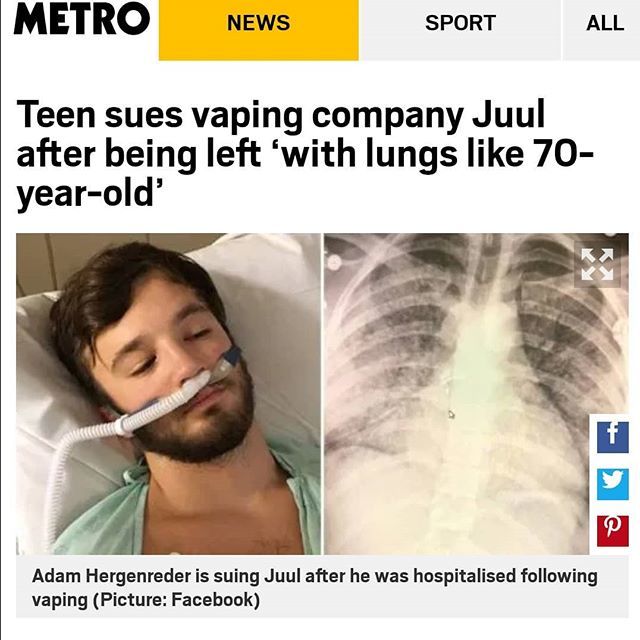 Vaping is like a ticking time bomb waiting to explode. The ugly tentacles of "CHEMICAL PNEUMONIA" are spreading across the US.

Vaping causes permanent irreversible damage to the lungs. It puts nicotine into the body. Nicotine is highly addictive and can slow brain development in teens and affect memory, concentration, learning, self-control, attention, and mood. It also increases the risk of other types of addiction later in life.

According to Juul’s website, a single Juul pod contains 40 mg of nicotine, which is similar to a pack of cigarettes. Most teens are not aware that e-Cigarettes contain NICOTINE.

We have conducted Social media campaigns to spread awareness of the dangers of VAPING.

Teens have morphed the brand name into a verb--"juuling". The numbers are shocking. More than 5 million middle and high school students currently use E-Cigarettes, according to the 2019 National Youth Tobacco Study (NYTS), up from more than 3.6 million last year.

Another study this year found that the rates of youth who say they vaped with nicotine in the past month more than doubled in two years. About 11 percent of high school seniors reported this habit in 2017, compared to 25 percent, or one in four seniors, in 2019. Among eighth-graders, the numbers jumped from 3.5 percent to 9 percent. The worrying part? Young people think vaping is mostly harmless.

E-Cigarettes Companies are making billions of dollars and our youth are paying for it with their lives. Some youth admit to spending $1,000 a year to indulge in VAPING.

It could be your brother or sister or your best friend. WAKE UP AMERICA. Let us save our YOUTH from the evil clutches of VAPING.

E-Cigarettes are robbing our nation of its youth. The writing is on the wall. It is high time to cut the head of the snake by boycotting E-CIGARETTES.

Vaping Tsunami is gripping our nation and taking our precious youth under it.

Read more about this issue:

Did you enjoy reading RENEE MENDONCA's article? Let your friends know by using any of the sharing options below. I am a 17 yr old teen who is truly GIFTED and PASSIONATE about writing.I wish to make an impact in the world through my writing.I am kind,talented,dynamic and a girl with big DREAMS to make a difference in this world.❤💜💖🌍 My hobbies are Sky diving, Scuba diving, Horse ridding, Skiing, Paragliding, Wind surfing. I am the Co-founder & President of the Model UN Club I am also the Co-founder of the WINGS of Hope Organization its a youth led awareness to spread awareness about the bad effects of Vaping, Smoking and drugs I am a youtuber, blogger, writer, Co-founder of 'WINGS OF HOPE a youth led organization helping youth addicted to vaping,drugs and smoking.I am also the Co-founder of the Model UN Club 💟🌼🌷😎 I love scuba diving, snorkelling and parasailing. I also run butterscotz a social media marketing website whose 100%profit goes to wings of Hope😎💜💞 I enjoy solving sudoku puzzles My passion is Globe trotting and discovering this beautiful Mother Earth. I have recently fulfilled my bucket lists by visiting 7 European dream countries i.e France, UK, Switzerland, Germany, Spain, Italy, Portugal.🌎🛩🛫😁😁😁