In the past few days, the world has woken up to one of the worst -- if not the worst – environmental disasters known to man. The Amazon rainforest, the largest in the world, has been burning for weeks now and it is not receiving nearly as much attention as it should be.

The AMAZON RAINFOREST has been burning for 3 weeks ..... WTF! Nobody is saying a word ! Nobody is doing nothing for our largest rainforest in the world ! Nobody is doing anything for some of the most beautiful people in the world nobody is doing anything for the animals 😨! Mother Nature is angry with us ... you better wake up or she’s gonna give us all the smoke 💨 News /media outlets are quick to cover bullshit and negative stories but won’t talk about the important things 🌍 Pray for Brazil 🇧🇷 All my friends in south America send me updates I’ll keep whosever watching posted and help as much as i can 🤘🏾 TU TU BANGGG • A amazônia está queimando há 3 semanas ..... wtf! Ninguém está dizendo uma palavra! Ninguém está fazendo nada pela nossa maior floresta tropical do mundo! Ninguém está fazendo nada por algumas das pessoas mais bonitas do mundo, ninguém está fazendo nada pelos animais! A mãe natureza está com raiva de nós ... é melhor você acordar ou ela vai nos dar toda a fumaça 💨 Notícias / meios de comunicação são rápidos para cobrir besteiras e histórias negativas, mas não falam sobre as coisas importantes 🌍 Ore pelo Brasil 🇧🇷 #brasil #brazil #amazon

According to the World Wildlife Fund, The Amazon is the largest forest in the globe with 30 million people and ten percent of known animal species on Earth. It supplies Earth with approximately 20% of its oxygen and is the home of one of the biggest wildlife biodiversities. However, this environmental heaven is facing total destructive mass burnings since this January. 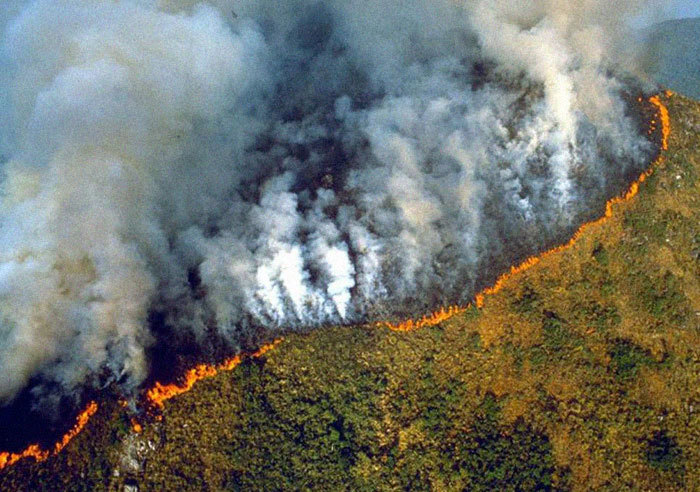 The Brazilian capital, Sao Paulo, was spotted covered by a massive black cloud. Later, it was discovered that the smoke was a result of flames extending from the Amazon, which is 2,790 kilometers away from the city. 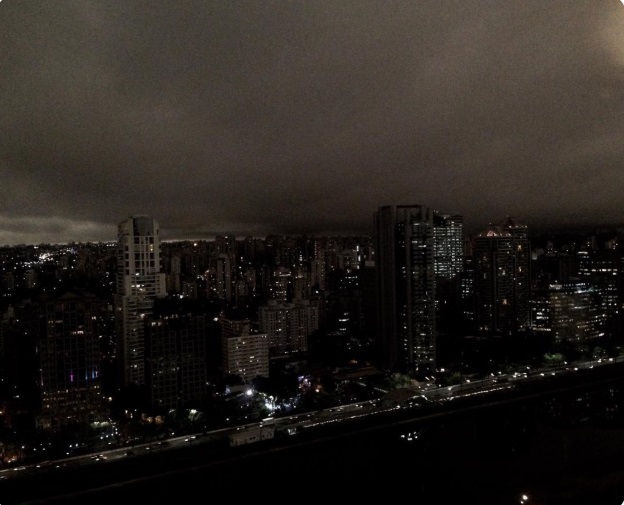 Paulo Moutinho, an ecologist and the co-founder of the Amazon Environmental Research Institute (IPAM), said deforestation is the "main cause" of the increase of fires in the Amazon.

Moutinho then explained the situation as follows:

Historically, fires are linked to the advance of deforestation, along with periods of intense dry season. But in 2019 there hasn't been such a severe drought as in previous years, while there is a noticeable increase in fires. Therefore everything indicates that the dry season is not at all the predominant factor. If there had been more drought it would have been much worse.

The Amazon Rainforest, one of the wettest places on Earth, is on fire.

Siberia, one of the coldest places on Earth, is on fire.

Climate change is for real and our planet is burning up. Humans are the cause of this deadly fever.#PrayforAmazonia pic.twitter.com/D6VCTaCNXt

How much of the Amazon has been destroyed?

The Brazilian national space research institute (INPE) stated that 73,000 fires have been burning from January to August 2019, and since last Thursday, more than nine thousand new fires have been registered. Also, the number of fires has increased by over 80% since last year.

As of now, no one can precisely determine the amount of damage, but since the smoke has been visible from outer space and imaged by NASA, we might be talking about one of the worst environmental disasters ever seen on Earth. 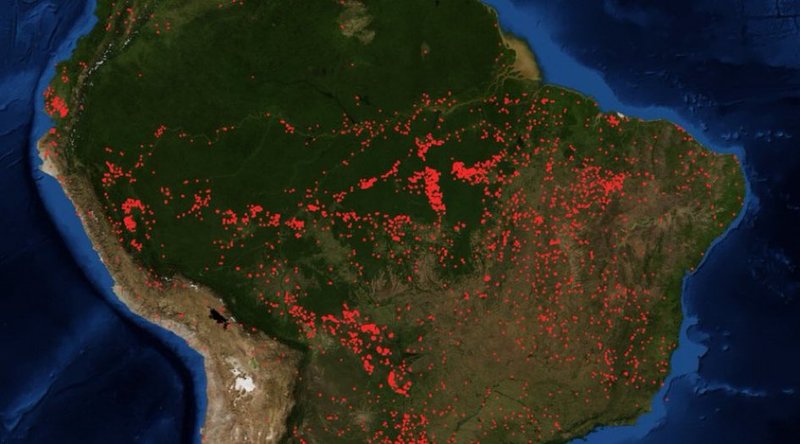 Who is to blame?

Today, environmental groups and activists blame Mr. Jair Bolsonaro, the Brazilian president for the crisis. They are accusing him of not taking the suitable measures for prohibiting or decreasing the deforestation of the amazon.

A huge increase in the deforestation of the Amazon has been noticed since Mr. Bolsenaro’s elections this January. A 63% increase to be exact! However, the president denied these accusations by blaming the farmers, saying that they started the fires to clear land in a process called "Slash and Burn".

Even more, Mr. Bolsenaro spoke on a Facebook live video about how non-governmental organizations ( NGOs ) are responsible for the recent crisis and stated,

They are now feeling the pinch from the lack of funding.

Brazilian President Jair Bolsonaro, without citing any evidence, accused non-governmental organizations of burning down the Amazon rainforest to bring shame to his government after he cut their funding. More here: https://t.co/FEPfl6BFVC pic.twitter.com/YAq8QDav9G

How can we help?

Unfortunately, until recently the world was completely unaware of the danger we are facing. Yet, a lot of geologists, influencers and celebrities started sharing hashtags like #prayforamazonia and pictures of the disaster, hoping for massive media coverage and an urgent solution for the disastrous events.

The Amazon Rainforest produces more than 20% of the world’s oxygen and its been burning for the past 3 weeks. It’s our responsibility to help to save our planet. #prayforamazonia pic.twitter.com/83bNL5a37Q

Our role begins with spreading the awareness of the climate crisis and the catastrophic effects of deforestation. Let's act fast to stop this disaster and to prevent similar ones from happening all over again.

Here’s what you can do:

Here are also some suggestion of The WWF (World Wildlife Fund) for how we can help:

Share the most significant photos on social media so that you can reach as many people as possible and inform them about this very important disaster for nature!

this is heartbreaking and terrifying 💔💔💔 ‪This makes me want to cry with frustration. what are we DOING? We’re literally destroying our miracle of a home 😭😭😭 I’m so sorry, earth 💔💔💔‬#AmazonRainforest #Repost @leonardodicaprio with @get_repost ・・・ #Regram #RG @IamNickRose: Terrifying to think that the Amazon is the largest rain forest on the planet, creating 20% of the earth’s oxygen, basically the lungs of the world, has been on fire and burning for the last 16 days running, with literally NO media coverage whatsoever! Why?

2. Donate to the emergency fund for the Amazon

With our donations, the WWF wants to identify all the areas and support all the communities that need help, help the communities extinguish the flames, prevent such a problem from happening again, and reduce the loss of land and start a lawsuit against the Brazilian parliament that is destroying it.

By signing the petition, the WWF will try to position the problem of the Amazon forest in first place in the emergencies of all countries.

The Amazon is known as the world’s lungs and it contains over 1/3 of the world’s remaining rainforests. But, at this moment, we are losing it. Education is a vital part of helping and providing adequate solutions.

Additionally, by gathering sufficient information about our environment, we can prevent this crisis from happening all over again. One of the crucial causes of the amazon fires is cattle ranching and deforestation. In this year we have seen a massive increase in the fires, and half of these burnings have happened in the last 20 days. So, what are you waiting for? We have to do something.

5) Be part of the change

Become a member of WWF and support their work in the Amazon. They work with civilians, social media and local governments in the Amazon in order to increase conservation and to reverse climate change. They want to restore 12 millions of hectares of forest by 2030.

Click here if you can help WWF for this emergency: Greta is a girl who live in a little town of north italy, she have 2 sister and love animals. her passion are dancing, music, acting and writing. she hope to work in one of this and go in a college like juilliard, tisch, yale or columbia.

Also known as Shahenda THEBOOKGEEK. I am a 22-year old indie book blogger, poet, magazine writer, and a senior dental student. If I am not reading, then you would find me writing book reviews, poems, women empowerment, career coaching or personal development articles. If not that, then you would definitely find me crying over my long lost GPA.