A lot of Gen Z’s families have members who are intolerant or racist. Sometimes it may be hard for one to approach a difficult topic when older family members are more outspoken or out of fear of offending them; however, change in society starts within everyone’s own community.

Many people have spent the most of their political outreach preaching to those who hold the same beliefs. For obvious reasons, this does not achieve the affect that would cause great change in our society. If you really want to help, you have to be willing to have difficult and uncomfortable conversations with people who disagree with you.

While this may seem like a daunting task, there are a few tricks and strategies that can ease the discomfort.

There are two main things that are extremely important to remember when dealing with those whose views you intend to change.

The most important part about starting this dialogue is to understand the difference between disagreeing and respectfully disagreeing.

You must be aware of the way you are saying things, and not simply what you are saying. For example, if you say “I understand; however…” versus “No, you’re wrong because…”, you are less likely to invoke defensiveness, which you want to avoid.

In order to help your counterpart understand your point of view, you have to ensure that they won’t feel attacked, this starts with respectful dialogue. I would suggest avoiding "you" statements, as this often leads to an accusatory tone, and rather, focus on how their actions are affecting the people around them.

It may even be helpful to ask them to keep an open mind; however, for some that may be too forward.

2. Understand where they are coming from

Many of those who hold intolerant or racist views come from complicated backgrounds, and some may not even realize their views are outdated or old-fashioned (what we now often refer to as politically incorrect).

The latter is easily addressed, yet harder to change. Old-fashioned ideas tend to be deep-rooted, which means conversations can entail a lot of stubbornness.

While this can be frustrating, dealing with stubbornness tends to be easier than dealing with chosen ignorance, as just because someone is stubborn, doesn’t mean they won’t hear your opinion and reasonings.

Understanding one’s background can allow you to relate to your counterparts, as well as adjust the means in which you get them to see the faults in their views.

Don't forget to explain to them WHY their reasoning is considered racist or hurtful, as that is one of the best ways to actually get them to change their thinking. There are many different ways to rebutt these common arguments that pop up; however, reading a basic rundown on each, can only help.

While some may think they are being “thoughtful” by using this slogan, the entire phrase was built upon belittling BLM, and contributes to the ignoring of exposed systematic racism and racial injustice.

There are many analogies circling the internet right now that people are using to explain why saying all lives matter is completely ignorant.

This comic was created by Kris Straub, which compares the dire racial injustices that many Black people are facing, to a burning house.

Others have used the analogy of a babysitter and kids: If you are watching four kids, and one falls down and scrapes their knee, would you give a bandaid to every kid? No, because only one kid is in dire need of that specific kind of attention. It doesn't mean that you don't care about the other three kids, or that you are ignoring their needs.

This analogy shows that just because you help out one specific group (people of color) doesn't mean you are completely disregarding or ignoring the needs of others.

Analogies can be extremely helpful when trying to explain to someone how their choice of words is being percieved by other people, and I strongly suggest that you find one that works for your situation and use it accordingly.

2. “More White people are killed by Cops than Black people”

Now, this one comes completely down to math. If you are being bombarded with “statistics” like this one, simply explain that it comes down to percentages relative to the proportion of the Black population that is being exposed to lethal force by police.

According to the Washington Post, Blacks are overrepresented among data that shows death by police.

The Society Pages did a piece on summarizing the data found by the Washington Post, in which they detailed, “according to the US Census estimates, Blacks made up 12% of the population. However, from 2015 – 2019 they accounted for 26.4% of those that were killed by police under all circumstances.”This means that “Blacks were the victims of the lethal use of force by police at nearly twice their rate in the general population.” 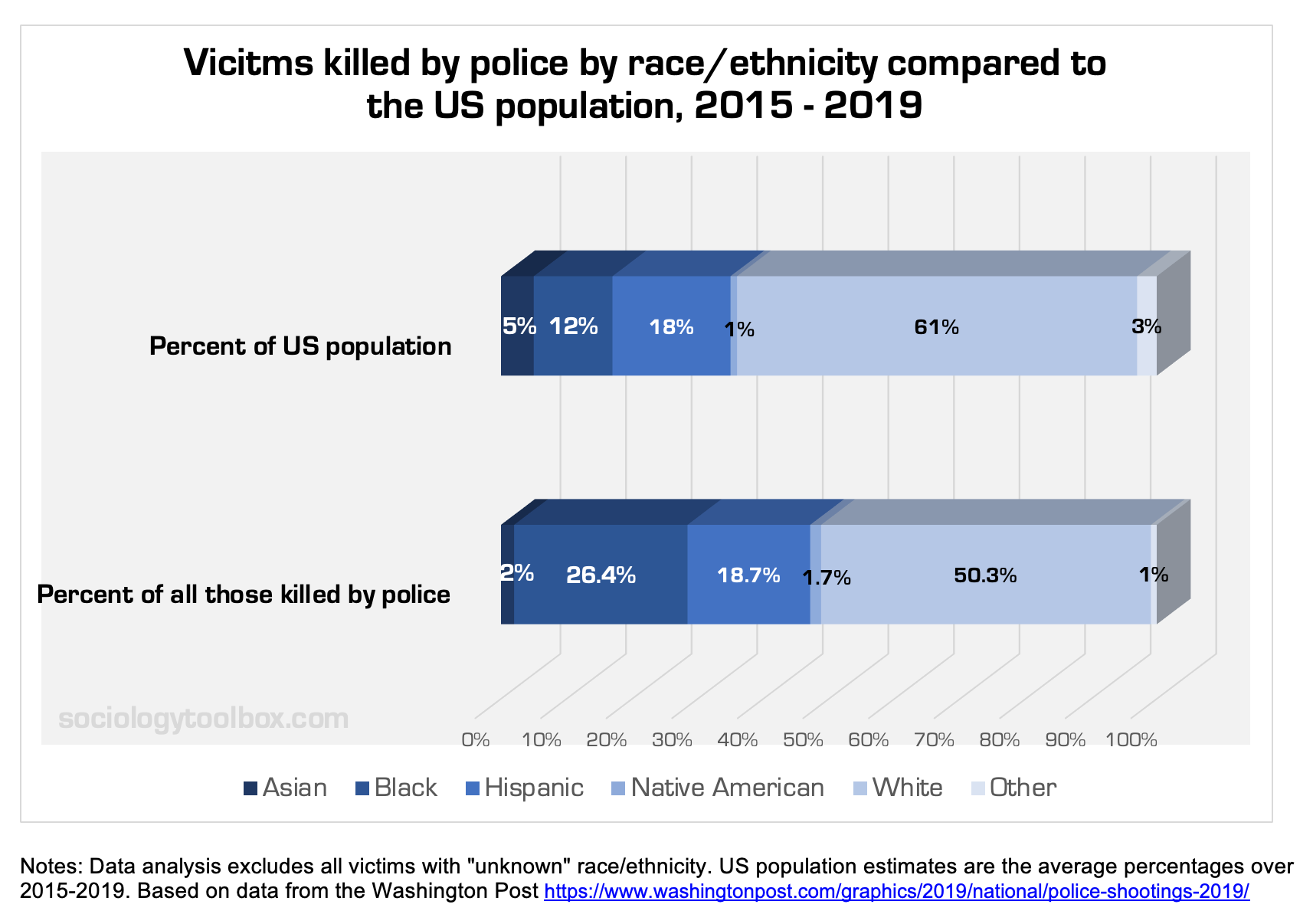 Make sure you mention that statistics don’t tell the whole story and that it is the context behind the numbers that shows what is really going on.

This claim often comes from people trying to use fake statistics to prove their point, and you should respectfully tell them to check their sources. If they don’t have any, you can tell them that according to the Bureau of Justice Statistics, the majority of most crimes are committed by someone of the same race as the victim.

An article came out in 2017 done by the Southern Poverty Law Center, that explained that while many try to argue that most crimes are Black people committing them against White people, when in reality, “some 57 percent of crimes involving white victims were committed by white perpetrators, while only 15 percent were committed by blacks.”

There is a lot of a data to show that contrary to the ideas of White Supremacists, most crimes are not committed by minorities against White people.

While, this might be what is illustrated consistently in the news, that is just another flaw in a system that is stocked full with racism. It is so important to understand that what you are seeing, may not actually be the reality. If you don't believe, just watch the movie Night Crawler.

Change starts with the bare minimum.

It’s your responsibility to educate yourself, and then use that education to teach those around you. Ignorance is a real disease in our country, but it can easily be treated with the right talking points and dedication.