“Lights up on Washington Heights” sings the ensemble of over 100 Latine performers featured in the summer’s most anticipated movie - In the Heights!

In the Heights is already well on its way to being the ultimate summertime feel-good movie of the year, raking in $11 million worldwide on its opening weekend. Packed with outstandingly choreographed musical numbers, In the Heights instantly transports viewers to the vibrant and predominantly Latinx-dominated neighborhood of Washington Heights, New York, home to writer, composer, and former-star , Lin Manuel Miranda. Miranda is well-known for his work in the 11-time Tony Award winning musical Hamilton, which was also digitally released last summer. However, In the Heights remains the first major project of Miranda’s, who has been working on the plot and music of the show since his sophomore year of college. Nearly a decade after the original idea for the show was proposed, the musical opened on Broadway in 2008, to much critical praise, including a win at “Best Musical” at the Tony Awards that year. In the Heights was incredibly special for being the first show allowing Latine audiences to see their culture represented, and Latine actors to have the chance to share their stories on the big Broadway stage. The show was also the first to include hip-hop style music in a Broadway musical, which was later popularized by Hamilton. 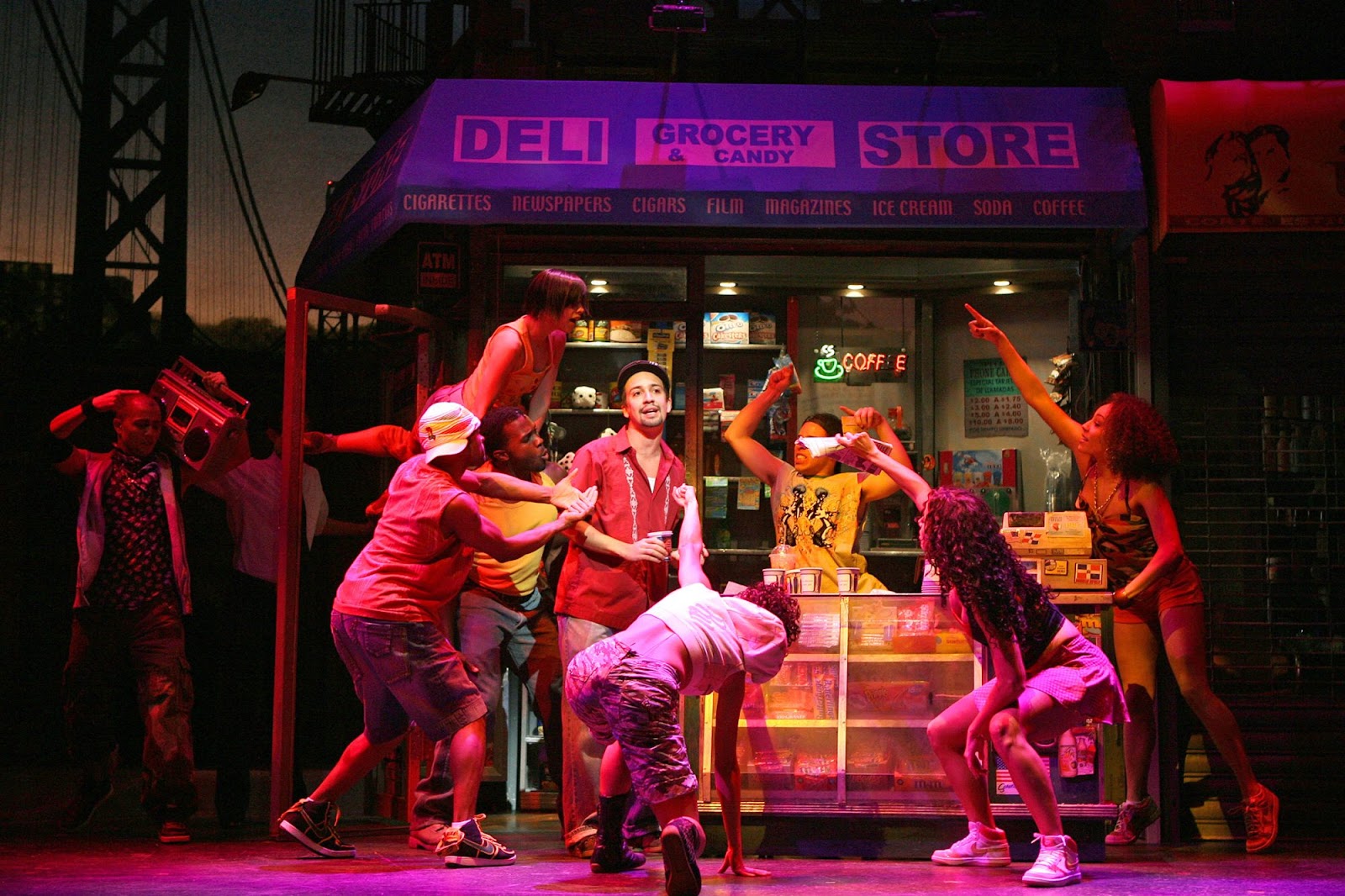 The movie is directed by Jon M. Chu, famously known for his direction in 2018’s romantic-comedy hit of the summer, Crazy Rich Asians. Having an emotional connection to the character Abuela Claudia from the movie, Chu explains how his own grandmother was also an elderly immigrant who taught him various recipes, family stories, and life lessons. After meeting up with Lin Manuel Miranda between performances for Hamilton, the two connected on what it feels like to have a dream - a “suenito”- as phrased in the film.

The idea of having a “little dream” remains a central theme of In the Heights, along with family, love, life, and loss. Following the life of convenience-store owner Usnavi de la Vega, whose main dream is to visit his homeland of the Dominican Republic, viewers witness what life in the “barrio” is like. As the neighborhood sings the powerful lessons of Abuela Claudia, audiences will empathize with Vanessa’s big dreams of leaving the neighborhood to make her name in the fashion industry. College dropout Nina’s internal struggles with her immigrant identity are met with love interest Benny’s belief in her, and his own wishes to become a wealthy businessman. The ladies of the nearby salon spill gossip and neighborhood vendors make their living meal by meal, all expressing “the story of a block that was fading away”.

In the Heights remained an incredibly enjoyable and awestriking experience, specifically through the musical numbers depicted throughout the film. Standout performances include the show’s opening act, where the neighborhood is introduced through Usnavi’s hip-hop-style rap, and “96,000”, as the main characters sing their motives for what they would do if they won the lottery. However, the film’s debatably most emotional and jaw-dropping number is “Paciencia y Fe”. Sung by the “barrio”’s beloved Abuela Claudia, the song expresses her struggles with finding her identity and maintaining "patience and faith" through difficulties in her life in both her homeland of Cuba and future immigration to the United States. Directed and choreographed beautifully, the number highlights the emotionally heart-wrenching acting of Olga Merediz, who also originated the role on Broadway.

The film being released both in theatres and available for streaming through HBO Max did what other productions such as The Prom, Into the Woods, and The Last Five Years did, which is make Broadway accessible to audiences around the world. Broadway is notorious for being extremely expensive, with some tickets for back seats for a show costing over $1000. Besides being overly pricey and elitist, Broadway is also only a one-time experience for its cost, and is only in one location in the world. These are just some restrictions that make it difficult for fellow theatre enthusiasts to get the proper experience of what it feels to watch a Broadway show. Although not shot and edited on stage and available for streaming like Hamilton and Newsies, In the Heights is able to provide a similar, magical feeling of experiencing a musical from the affordable comfort of one's own area. 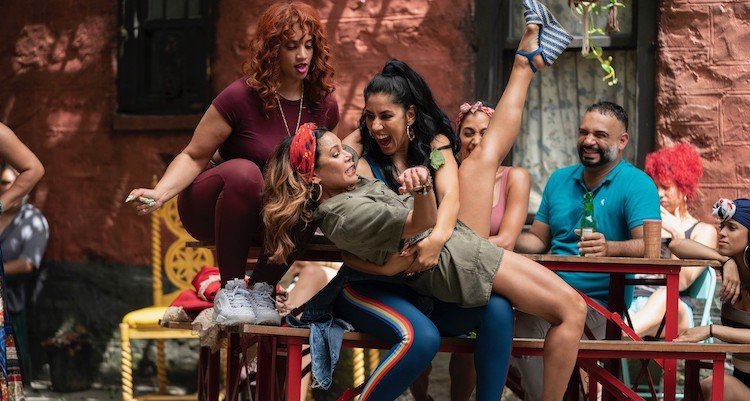 In the Heights also carries its all-Latine cast with the expectation of Benny, creating representation both on stage and now on screen for Latine audiences around the world. Furthermore, the addition of Usnavi’s teenage cousin being an undocumented immigrant hit close to home to all viewers experiencing unfortunate similar situations. Daniella and Carla, two of the eccentric and free-spirited salon workers, are a couple in the movie. They are seen waking up together in the morning during the film's opening number, slow dancing together, etc, all adding queer representation to the film which was lacking in the original musical. However, audiences and critics have spoken out about the exclusion of Afro-Latine actors in main roles in the film. While a majority of the background dancers are Afro-Latines, all of the principal cast are lighter-skinned, making In the Heights subject to colorism. The actual neighborhood that the film is based on, Washington Heights, is home to a large percentage of darker-skinned Latines, and the lack of that representation on screen still feels like a step backward to many. Lin Manuel Miranda himself has discussed the backlash, both in a myriad of interviews and through Twitter, saying he “wrote In the Heights because he didn’t feel seen” and is “truly sorry” for the lack of “sufficient dark-skinned Afro-Latino representation”. He ends his reflective tweet with an apology and promises to do better in all upcoming projects.

While different from colorism, racism played an important part in the original stage musical, which was cut from its transition to the screen. In the Broadway version, Kevin Rosario, father of Nina, is disapproving of her relationship with Benny because he is black. In fact, Mr. Rosario tries to cover up his racism by mocking how Benny cannot speak Spanish and condemning how he is not good enough to date Nina. This is one of the driving forces of Benny throughout the stage show, which felt missing from the movie. This is further amplified in the climaxes "The Club" and "Blackout", which occurs after dinner at Nina's house, when Vanessa, Usnavi, Nina, and Benny all head to the night club. In the original musical, Mr. Rosario had sold his car service, which Benny had hoped to sell one day, in order to pay for Nina's tuition. This makes Benny incredibly angry, as the reason he was working so hard was in order to make Mr. Rosario proud, and one day, get his approval to be with Nina. Angrily, he gets drunk at the bar and punches a man he sees dancing with Nina. This entire storyline was changed in the film to depict a fight between Vanessa and Usnavi instead, who are mad at each other for dancing with other people. These important details about Nina and Benny made their relationship seem a bit rushed and forced, although still entirely adorable! 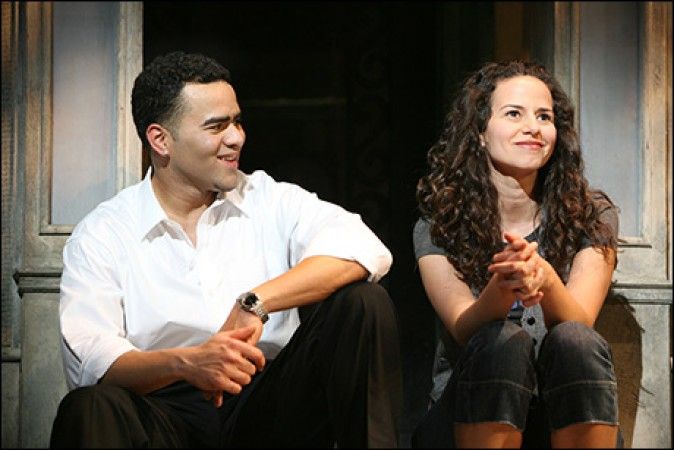 In addition to this cut from the Broadway version, Vanessa’s character is supposed to have an alcoholic mother, which is one of her motivations for getting out of the heights and into a more “sophisticated” suburb in the city. Without this factor mentioned, Vanessa’s forceful singing in numbers such as “It Won’t Be Long Now” and “96,000” felt unnatural and incomplete. Additionally, as enthralling "Paciencia y Fe" was, the emotional and power-packed song provided a lot of information to viewers right before [SPOILER] Abuela Claudia's death after "Blackout". If audiences were able to experience the number much before her death, as in the original musical, it would give more time to sympathize with her struggles and allow for a larger effect during her actual departure.

Being a big fan of the original musical, it is safe to say that Miranda and Chu have done a spectacular job in translating an entire Broadway musical with such important significance to today's society into a digital and accessible medium which allows more people than ever to experience the wonders of the characters, plot, music, and more. And if there's anything we can learn from the 2 hours and 40 minutes of theatrical joy that is In the Heights, it's to continue to fill our own neighborhoods with the "patience and faith" that Abuela Claudia herself would be proud to witness.

Did you enjoy reading Jiya Singh's article? Let your friends know by using any of the sharing options below. Jiya Singh is a rising junior at Monta Vista High School in California. Jiya enjoys listening to music, writing, playing guitar, crocheting, and playing games with her family during her free time.