As a humanities student, I know what it’s like to struggle with the daunting task of writing a 500-word essay. You don’t know where to start, your thesis is nonexistent, you’re dreading the inevitable late-night ahead, and you’re struggling just to turn thoughts into words.

Three hours later, and you’re crying into your pillow out of frustration.

Trust me -- been there, done that. I study three subjects at Sixth Form and luckily for me, all three are essay subjects (English Literature, English Language and History) which means that I have written more essays than I can count in the last two years. I have needed to get this process down-pat until it’s just rinsed and repeat. I can now churn out a 500-word essay in under an hour, and here’s exactly how I do it.

You’re not J.K Rowling, so stop beating yourself up for it. Your first draft is going to be terrible. Like chocolate chips with ranch dressing terrible. But that’s okay -- the sooner you get over your terrible writing, the easier the rest of the essay will flow.

“I’m writing a first draft and reminding myself that I’m simply shoveling sand into a box so later I can build castles.” ─ Shannon Hale

The tendency toward perfectionism is the enemy of all progress. The biggest mistake I ever made was repeatedly re-reading everything I wrote, going back to edit, realizing I hated my writing, and then getting in the way of any progress I was making.

Put some virtual blinders on and write your little heart out. Who cares if the first draft is awful? No one is going to see it. Correcting an existing essay is MUCH easier than writing a perfect essay from the gecko.

If you find it hard to stop yourself from constantly rereading, try to scroll down the page until most of your essay is covered. Then don’t let yourself scroll up until you’ve surpassed 500 words (but make sure you’ve read step number two first).

“All writing problems are psychological problems. Blocks usually stem from the fear of being judged. If you imagine the world listening, you’ll never write a line. That’s why privacy is so important. You should write first drafts as if they will never be shown to anyone.” ─ Erica Jon

So go back to your screen, accept that the first draft is going to be DARN AWFUL, and challenge yourself to write that first sentence -- then another -- and another.

Step 2: Make Sure You Have a Plan

What’s the sense of writing 500 words arguing against a school dress code when you were supposed to be writing about the Revolutionary War? Okay -- that’s a bit of an extreme example, but the reasoning holds true. Before you start writing like a determined maniac, you need to also have an outline first -- otherwise, you could end up scrapping most or all of what you wrote in the first place.

THE NUMBER ONE, MOST IMPORTANT THING ABOUT WRITING AN ESSAY IS TO MAKE SURE YOU’RE ACTUALLY ANSWERING THE PROMPT.

I know -- it sounds simple -- but you’d be surprised how many people will mess up on this step.

Changing and switching up wording after-the-fact is easy -- completely changing arguments, switching up paragraphs and essay flow is not. If you need to -- rewrite the question in your own words; write a brief outline of the direction you want your essay to go on, and then start researching!

A word of caution: we've all tried to “BS” an essay before -- writing fluff without really knowing the content. This doesn’t work in the long term. Trust me. You’ll just end up writing the same essay again, after you’ve actually done the research. Getting all your thoughts down on paper the first time is also MUCH EASIER when you actually have well-researched thoughts about that topic.

So make sure you know the content and collect your notes -- do whatever you need to prepare. This includes collecting your stationery and paper etc, so that before you know everything you want to write about.

Researching beforehand (unless you’re already an expert) is not a step you can skip, and you actually end up SAVING YOURSELF TIME in the long run. The researching phase does not need to be an extremely long process (depending on the essay) because it can be combined into the outlining phase.

For me personally, I keep a running doc of all my notes from different websites and resources and make sure to keep track of where I’ve found all my notes at the bottom of the doc. It’s ok to copy and paste notes for the sake of efficiency -- but make sure that you completely change the wording and cite correctly when including facts in your essay! 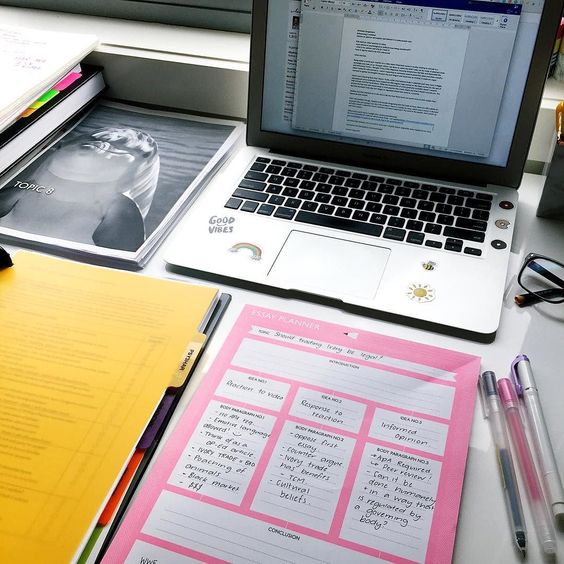 Once you feel like you have A) gotten a rough idea of your thesis and B) have a good understanding of the evidence and background of your topic, you can move on to creating the organizable flow of your essay!

Step 4: Turn Your Notes Into an Outline (in 5 minutes)

This part can be done fast, contrary to what teachers often make you believe. What I do in this step is:

Now you’re ready to put blinders on and write that essay like nobody’s business.

Step 5: Write Your Introduction and Get Your Essay Flowing

Don’t stress too much about the first sentence. A sentence to get you started is better than staring at a blank page -- you can always come back to craft your perfect hook. Just put something down on the page to start with, and then you can move on and get that essay flowing!

The second step of writing the introduction is figuring out what exactly you are trying to get across to the reader from your essay as a whole. What is your response to the essay prompt? This answer should be clearly spelled out to the reader in the introduction. Essays are *not* the place for unwelcome surprises. That is what jump scares in horror movies are for.

If you are comparing two things such as books, arguments, factors, etc., use the Both However Whereas structure. Both A and B say this or talk about this, however, A says this about it, whereas, B says this about it. Then back this up by saying, this is a comment on C. C can be anything: 'the expectations of the time' 'gender roles' 'Truman's presidency'. The point of this is to add context to your introduction straight away and show that you are basing your line of argument (what you want to say) on facts and knowledge.

Your thesis should be the last sentence of your introduction -- there are rarely exceptions to this. This is where you spell out your argument and introduce the main points that support your argument and will be backed by your body paragraphs.

Sample structure from one of my argumentative essays from 2015:

__ Main argument that **answers the prompt**

Imperialism ultimately changed both the colonizer and the colonized by introducing Western Political Thought, creating nationalism, and testing morals.

Now it’s time to go back to your notes. You’ve already (hopefully) determined what your three major points are and which notes/facts should support which points. Now it’s time to turn your notes into sentences.

Figure out what each topic sentence is going to be. A common mistake is to simply state a fact (I am guilty of this in many of my old essays). A good topic sentence makes a claim that can then be supported with additional facts and examples and clearly relates back to the thesis.

Topic Sentence Example: Imperialism caused the colonized and the colonizers to react in ways they normally would not.

This sentence does not simply state a fact -- instead, it introduces my third point referenced briefly in my thesis for my third body paragraph of “testing morals.” Your topic sentence does not need to be complicated, but it should connect to your overall argument and introduce the point of this individual paragraph.

Once your topic sentence is written, it's time to turn your notes into sentences to supporting the claim made in your topic sentence. The majority of your body paragraph should be backing up your paragraph’s point with evidence, facts and quotes. At the end of your paragraph, relate back to the question (don't forget your key-words) and make a judgment about this individual point in reference to your thesis.

Step 7: You're Finally Ready to Conclude!

Go out with a bang! Finish by making a decision, tell the reader what the answer is. Start with something other than the cliche 'to conclude' or ‘ultimately.’ Teachers are tired of hearing those words, and often, they can be left out. Go with ‘ultimately’ however if you feel like your conclusion is incomplete without this transitional phrase. If you can, save a nice interesting fact to hit the reader with in the conclusion. This is your chance to essentially say 'so basically I was right and the previous paragraphs are the proof of it'. Don't forget that every writer -- even JK Rowling -- needs to edit their first draft multiple times. This article is a guide for how to write 500 words in one hour, but you still need to go back to edit. A guide on doing exactly that will be published on The Teen Magazine next month, so make sure you subscribe to our newsletter so that you're notified when it's written!