This summer, we have witnessed what seems like one heatwave after another across the globe, from Europe to India to everywhere in between. Accompanying these episodes of extreme weather are wildfires, drought, and risks of infrastructure failure, as well as a multitude of health hazards.

What does this mean for our present and future, and what threats does it pose to life as we know it on planet Earth?

First, What Is A Heat Wave?

A heat wave is defined as a period of abnormally hot weather generally lasting more than two days. Heat waves occur when high pressure develops over an area. Such high pressure systems can remain for days or even weeks, causing continual dry, settled weather.

These heat waves are responsible for the scorching temperatures and the associated droughts, wildfires, and health hazards experienced in Europe, the USA, and parts of Asia in the spring and summer seasons of 2022. How Are Heat Waves Linked to Climate Change?

While heat waves are defined as extreme weather events, they are made more likely and often more intense by climate change.

A scientific study carried out by the UK Met Office after a heat wave in the summer of 2018 showed that such events are 30 times more likely to happen now than before the Industrial Revolution, due to the higher concentration of carbon dioxide in the atmosphere.

Furthermore, climate scientist Friederike Otto of Imperial College London, a pioneer of the method of "attribution studies", has stated that, at least in certain instances, "We can very confidently... say that every heatwave... occurring today has been made more intense and more likely because of climate change." She also adds that climate change is certainly a "game changer" for the occurrence and severity of heat waves. Extreme heat has enveloped the Northern Hemisphere throughout this year.

In March, India and Pakistan entered a searing two-month heat wave. Rainfall levels were 71% below average in India and 62% lower than normal in Pakistan. At its peak at the end of April, the heatwave had affected 70% of the former.

Heat waves are not unusual prior to the monsoon season, but the combination of such high temperatures at an early point in the year with below-average levels of rainfall caused the adverse heat conditions and their detrimental consequences. These include 90 total deaths across the two countries, an estimated 10-35% reduction in crop yields in the Haryana, Uttar Pradesh, and Punjab regions, forest fires in India, and the Glacial Lake Outburst Flood in northern Pakistan.

Then, in June and July, all-time temperature records blistered Europe and the USA.

Western Europe, which had already been suffering from drought, experienced innumerable forest fires. These were mostly concentrated in parts of France, Spain, and Portugal, where temperatures climbed to 45 degrees Celsius (113 degrees Fahrenheit) while thousands of acres burned. 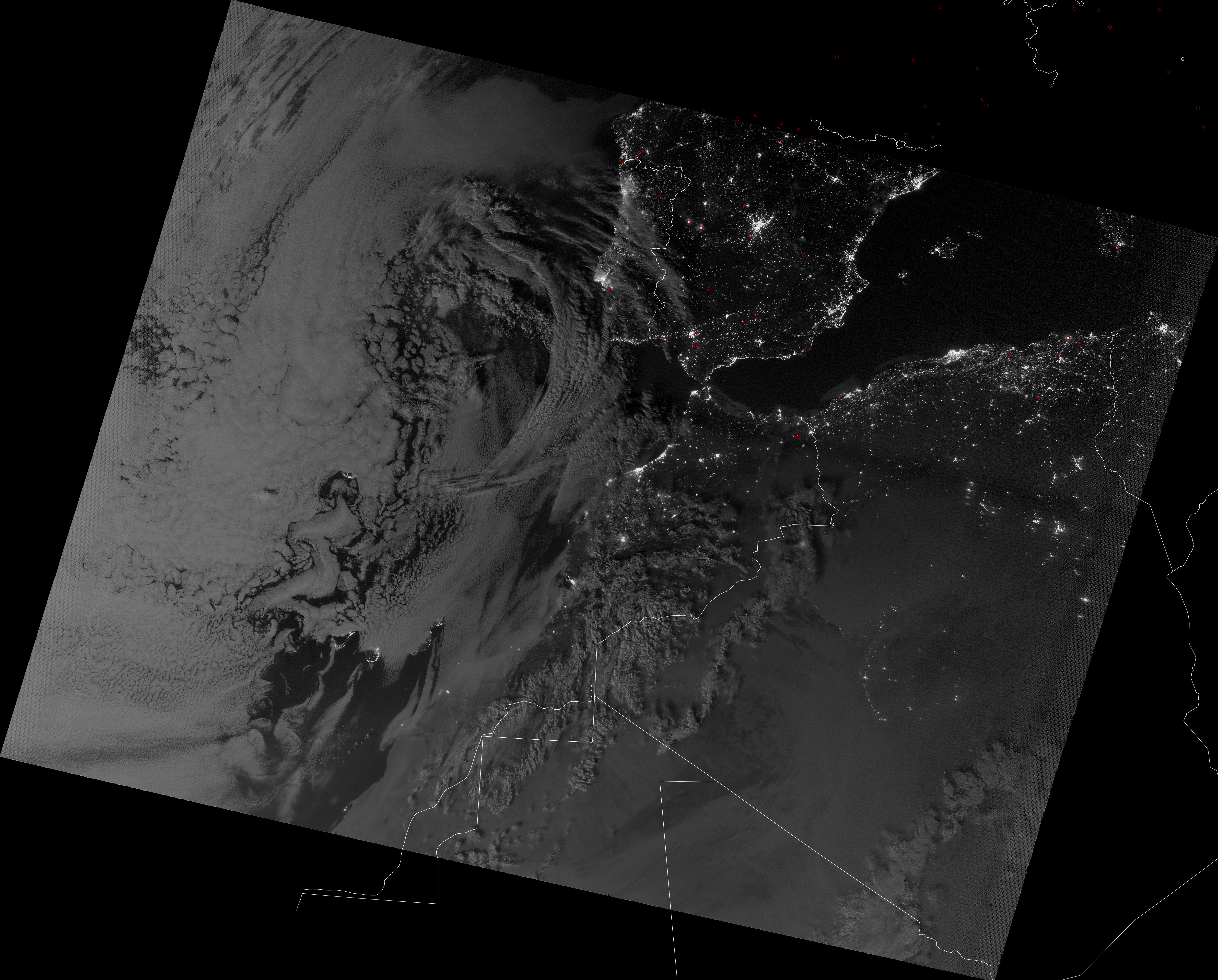 The above image shows the locations of fire detections in Portugal, Spain, and parts of North Africa, as observed by the Visible Infrared Imaging Radiometer Suite (VIIRS) on the Suomi NPP satellite on July 12, 2022.

This summer, the Midwestern and Southeastern parts of the USA were also affected by historic heat waves. Over 100 million people lived under a range of heat alerts; various temperature records were also broken in several states, including Colorado at 100 degrees Fahrenheit (37.7 degrees Celsius) and Texas, where a temperature of 106 degrees (41.1 degrees Celsius) was reported.

Courtesy of the National Weather Service

Summer 2022: The Coolest Summer for the Rest of Our Lives?

Since the 1980s, every decade has seen warmer temperatures than the last, a trend that is expected to remain consistent in the coming years. The ten hottest years on record have all taken place in the 21st century, with the top three being 2016, 2019, and 2020.

Professor Petteri Taalas, Secretary-General of the World Meterological Organization (WMO), has stated that we can expect more regular and more intense heat waves to come.

“In the future, [these] kinds of heatwaves are going to be normal. We will see stronger extremes. We have pumped so much carbon dioxide in[to] the atmosphere that the negative trend will continue for decades. We haven’t been able to reduce our emissions globally." He also went on to say that he hopes this acts as a "wake-up call" for governments and that it will hold some influence over the decisions voters in democracies make. What Threats are Posed by these Heat Waves?

There is a multitude of risks posed by heat waves, and with climate change driving up global temperatures, these issues can be expected to become more extreme in the future.

One of the obvious examples is the danger posed to human health. Exposure to extreme heat can cause heat stroke, heat exhaustion, and heat rash, as well as dehydration, cramps, weakness, and lethargy. Young children, older people, and those with chronic diseases are especially vulnerable and at significantly greater risk of difficulties and potentially death in a heat wave.

Agriculture is a sector extremely vulnerable to increased temperatures. For instance, plant growth is hindered by higher daytime and nighttime temperatures, while livestock is also at greater risk of developing heat stress during heat waves. This, in turn, causes slower growth and a decrease in milk production.

As heat waves intensify wildfires and droughts, this leads to further negative and often far-reaching impacts on agriculture. This was the case in India earlier this year, where wheat crop yields were greatly reduced as a result of the extreme heat. This led to the government's veto of a previous plan to provide wheat in an effort to supplement the world's supply due to the effects of war in Ukraine.

Higher temperatures have a plethora of effects on many facets of energy systems. Warmer temperatures during summer increase the demand for electricity for cooling purposes, while simultaneously reducing the ability of transmission lines to carry power. This can cause problems in heat waves, including rolling blackouts.

Even though warm winters will cause a decline in demand for heating, it is estimated that in the USA, overall energy use will increase in the hotter future climate we are currently headed towards.

Furthermore, as lakes and rivers warm, their ability to absorb waste heat from power plants decreases, reducing the efficiency of power production. This creates difficulty for power plants to adhere to environmental regulations and could cause more plant shutdowns.

How Can We Reduce The Effects of Heat Waves?

There are plenty of strategies to build resilience to heat waves in our communities, such as: It is imperative that we remember to view these extreme heat waves and their consequences on individuals, communities, and the world as part of a bigger picture: climate change.

Although heat and climate resilience strategies are undoubtedly helpful, the only viable long-term solution to alleviating the effects of heat waves and other climate change-related weather events is to reduce the impact of climate change itself.

As we know, this involves cutting greenhouse gas emissions, by no means a simple feat. However, actions such as the USA's recently passed Inflation Reduction Act, which would put $369 billion worth of funding toward clean energy and reducing pollution (among other things), as well as international treaties such as the Paris Agreement, which implements a framework for countries to reduce global warming, are progressive and practical pieces of legislation in working to achieve this goal.

In addition, there are also many simple steps we as individuals can take to reduce our own carbon footprints, such as avoiding plastics wherever possible and switching to a (mostly) plant-based diet.

If we do not do this, heat waves are going to continue to become even more severe and dangerous, and will pose even greater threats to our planet and all of its inhabitants. Ava is a sixteen year old student in Dublin, Ireland. She has a keen interest in social justice, politics and international relations. When she's not writing, Ava can be found reading, debating, listening to Lana Del Rey, hanging out with friends and re-watching Gilmore Girls!