A few months ago I discovered Dorian Electra through Youtube’s mysterious recommendation algorithm. I spent hours mesmerized; watching the same videos again and again, trying to understand what I was watching and what it meant for me. I’d never seen anything like it, but, as I watched Dorian systematically smash things over their head in every single video, things felt like they made sense for the first time in my life. 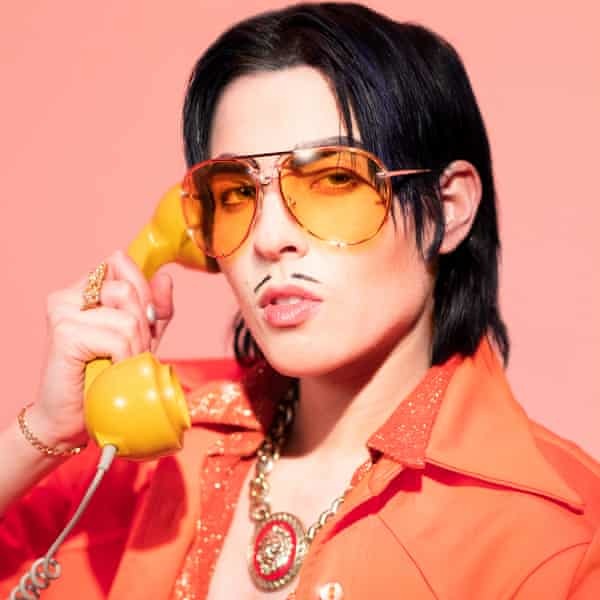 Dorian Electra (pronouns: they/them/theirs) is a gender-fluid, queer, rising pop sensation. They released their debut album (Flamboyant) in August 2019 – the album is a stunningly refreshing satirisation of gender roles and masculinity, and, as the name suggests, shamelessly flamboyant.

The music, a mix of ultra-synthetic early 2000’s pop and 80’s funk provides the background for powerful lyrics such as “are you man enough to soften up? Are you tough enough to open up?” and “I hear what they call me […] but I’ll never change.” And the album seems (at least to me) to tell the story of someone’s journey through toxic masculine ideals to self-acceptance, being able to show vulnerability and presenting themselves how they want to without worrying about societal pressure.

This idea was something I really supported because, as a biological girl, I often feel uncomfortable with the explicit and objectifying messages spread by many mainstream popular songs. So, I really appreciated Dorian’s effort to make music that meant something more and that carried healthier messages for people.

Which leads me to one of, in my opinion, the most meaningful songs in the album: Adam and Steve. This is a hugely powerful and moving song that comments on the opposition of some religious people to the LGBTQ+ community. The song explores the idea that G-d cannot be opposed to LGBTQ+ people as he made everyone “in his image”. The lyrics such as “G-d made me and he loves me” and “say I’m an abomination but I’m G-d’s creation” are sung with such incredible force and palpable pain that it is hard not to be deeply moved by them.

And moved I was. For context, I am a deeply religious and observant Jew. Religion is at the center of my life: it decides what I eat, what I wear, how I spend my Saturdays and much much more. G-d is the first thing on my mind every morning when I wake up early to pray and the last thing on my mind at night as I do my evening prayers. My synagogue is the place where I feel most at home and it’s somewhere that holds many happy childhood memories for me.

I am extremely lucky - my religious community is very open and welcoming to all kinds of people, indeed our Rabbi, the leader of the community, is a woman. However, I have always felt very aware of the weight of certain Torah verses hanging in the air, never acknowledged but known to all (I’m speaking here specifically about a certain controversial Leviticus verse). So while I knew acceptance from the community was there, it was acceptance from myself (and my idea of G-d) that had always been difficult for me.

This is where Dorian Electra and specifically their song, Adam and Steve, come in. Listening to it I felt like some of the barriers I’d built up over the years around how I presented and thought of my gender and sexuality were starting to erode and let the light through. I had always had doubts but had never allowed myself to really think about them properly. Dorian Electra’s music allowed me, for the first time in my life to really question things and to try to figure out what made me the most comfortable. To be clear, I’m still in this process and I suspect it will take me years of unlearning the harmful boundaries I put on myself to truly find out who I am and who I want to be. But, thanks to Dorian and their assurances that “[G-d] loves me” I have a safe basis from which I can start exploring.

This coupled with the bold, carefree attitude of other songs on the album like Guyliner and Flamboyant which strongly convey the message of being yourself and not allowing yourself to be told what to do or say and letting yourself “take up lots of space” have been hugely confidence-boosting for me especially as a biological girl in a society which tells girls to be quiet, well behaved and definitely not take up space.

They’ve also given me the confidence to explore how I present my gender identity something which I’m greatly enjoying doing especially as at the moment it is so fluid; some days I’ll bind my chest and wear a suit, other days a skirt and sparkly shoes have been what I felt most comfortable in. Most days it’s something in between – my favorite look so far has been a full suit and jacket with neon pink nail varnish and matching lipstick. This kind of experimentation is something I never would have imagined myself capable of (never mind enjoying) but thanks to Dorian Electra’s music it has become a normal part of my life and something I’m looking forward to exploring more.

This also leads me back to my religious identity as an observant Jew. A hugely important part of exploring my gender and probably the most powerful and difficult parts of that journey so far have been my incorporating religious (and traditionally gendered) clothing into how I express myself. I have found it incredibly liberating to start wearing a Tallit (prayer shawl normally worn by men) during Synagogue services and I’m hoping that one day I will be confident enough in my identity to start wearing a yarmulke (skull cap) as well.

These are both items that my wonderful, tolerant community welcomes both men and women to wear, but because I’d always held myself back I’d never tried to wear either. Now I wear my Tallit proudly and far from taking me away from G-d (as I had feared it would) I feel it has brought me closer than I ever have been as I finally feel more comfortable and more myself.

I am so grateful to my family and community (and of course to Dorian) for giving me the space to experiment – I am beyond lucky. And I hope that if you’re someone reading this and you have doubts similar to mine that you one day find the courage to discover you. I know that it has made me a better, happier and yes, more Flamboyant person.

Leah Rose is a Year 10 (9th grade) high school student in England. She enjoys writing, hanging out with friends, debating and volunteering at her synagogue.