Instagram infographics, an intention to appear “woke,” with a few finger swipes and reposts sum up performative activism pretty well. Shockingly, racist incidents and deaths are not new. Unfair prison sentences and death penalties are not new. Nor are human rights violations. With the death of George Floyd and Breonna Taylor last year, suddenly, everyone’s awake to the centuries of unjust that is happening in the country.

Whether it’s the girls who used to spill racial slurs everywhere she goes when she was younger or the companies who never showed inclusion and equity in their work environment, everyone’s suddenly hopped on the bandwagon to declare their ever-living solidarity to the BLM movement.

The undying trains of Instagram stories of the same reposts have a short life of 24 hours. And it seems that the majority of the users’ empathy and actions share the same life. On June 2nd, more than 11.3 million posts of #blackouttuesday were posted on Instagram, advocating for signing petitions and calling local offices about George Floyd’s case. On the same day, the petition on Change.org only increased by merely 2 million.

A few days after, the posts magically disappear from everyone’s Instagram feed, as if the hashtag was a trend to participate in to boost their unsurpassed ego and morality. Most of these people are more interested in increasing their own social capital, with no emphasis on the real issues at hand. Reducing the fight for the BLM protests, a movement that wants nothing but equal human rights, to another internet aesthetic trend is a mockery of morality.

An even worse reality is, some of us are engaging in performative activism without even knowing it. Misinformation and biased infographics tend to outshine traditional media sources like The New York Times or The Washington Post when they are engaging young readers on social media. This means that once the unfact-checked infographics and tweets go viral, which they almost always do, the misinformation will sound increasingly real with the increasing engagement it gathers.

Take the viral tweet by @lewahti for example. It claimed last September that the deaths at China’s Uyghur concentration camps surpassed the deaths of The Holocaust. A day later, the tweet was everywhere on my Instagram. My friends who have not once talked about the Uighur minority or the concentration camps are now reposting about them like they suddenly became the biggest advocates for them. Not a single person of those who reposted fact-checked the things they were reposting. It took another week for a holocaust Instagram account to deny the claims made by the viral tweet. It shows us how easy it is to manipulate and influence the general younger audience, whose ability to uncritically think and repost about anything that seems “trendy” is utilized to the best. 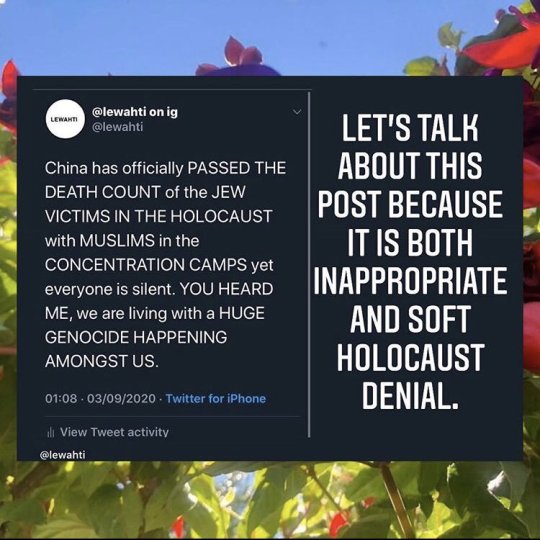 Perhaps we need to be more honest with our intentions. We should constantly be asking ourselves questions before sharing information on social issues on social media. Who is the center of this post? Is my goal to improve my “wokeness” or to inspire changes around me? Is the information on this post correct, and should I engage in the post before making sure the sources are reliable?

Performative activism can only be changed by your self-reflection and awareness. I hope that beyond the square you posted, the aesthetic infographic you shared, you are actively educating yourself and learning from your mistakes; that even after three or five years when the BLM is no longer a trend, your support and allyship will still be present.

Did you enjoy reading Jenny Rong's article? Let your friends know by using any of the sharing options below.

Jenny Rong is an editor for The Teen Magazine. She is a junior from Hong Kong who studies in New York and she loves to advocate for marginalized groups through writing. She enjoys spending her time finding new music, painting, and binge-watching Netflix.