A little under two years ago, Nicole James sat at a table in a small, cramped room with no air conditioning as she worked with a crew to film the second episode of Boombats, the web series she was currently starring in. As a Monty Python-esque mother character, played by Tony DeSantis, placed some food on her plate, she exclaimed, “Oh no, Nonna! I’m lactose intolerant.” Innocently, DeStantis’s character replies, “that’s nice. I’m Calabrese,” referring to his character's Italian nationality. At this, everyone in the room erupted into a fit of laughter. It is moments like these, Nicole says, that she finds true joy in her acting. Little did she know, less than a year later she would be standing on the set of Locke and Key, an upcoming and highly anticipated Netflix Original Series. The Teen Magazine was given the amazing opportunity to speak with Nicole about her experiences as a young, up and coming actress. 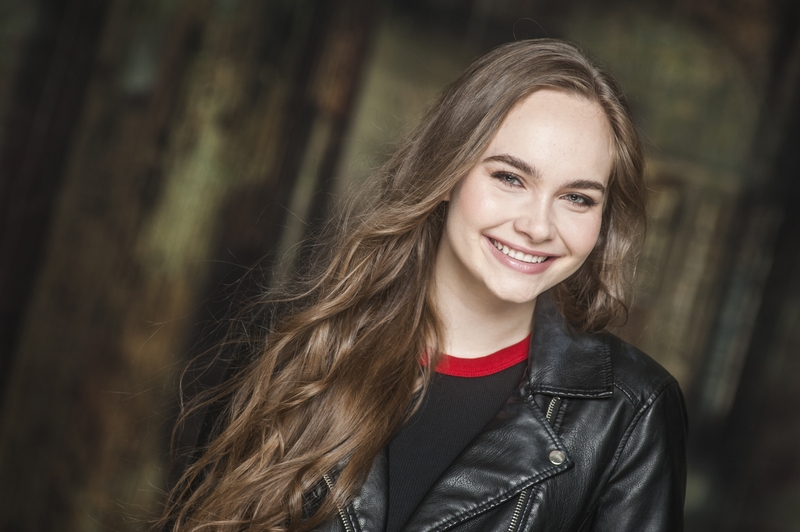 The interview first began with questions about Nicole’s childhood, namely her first steps into the world of acting. Born on January 31, 2002 (a fellow Gen Z), Nicole has lived in Toronto, Canada, her whole life. In her free time, Nicole enjoys indulging in some winter sports, skating around, playing the piano or guitar, or maybe even playing some video games. On the weekends and some evenings, Nicole can be found working hard in her acting classes in places like Armstrong Acting Studios, Bongo Productions, as well as taking improv classes at Second City.

Currently, Nicole attends an art school in which she is studying music and vocal arts. She made special note of a deep love she found for her computer-technology class that she had taken. “I think what was most fun about it was creating and then editing the film,” she said. “It gave me a whole new appreciation for the effort that goes into making what we see on television or in movies.” From early on, Nicole said she knew that she wanted to have a career that had something to do with the fine arts, whether it be dancing, singing, or, as it turned out to be, acting.

When asked about the time when she first fell in love with the world of acting, Nicole recounted an experience she had in her eighth-grade class. “My teacher had us read a book (I totally forgot what it was, though) and write a monologue from the perspective of one of its characters. After I presented, I was really surprised by the reactions of my classmates. Like I even made some of my friends cry! My teacher told me that I needed to go out and showcase my monologue to other people, so I did. And that was pretty much where it all began!”

From there, we went into some trivial, more amusing questions such as “who is your celebrity crush” and “what is your favorite movie?” Nicole found a particular love towards actors KJ Apa and Tom Holland as well as Panic! At the Disco’s own Brandon Urie. Meanwhile, she doesn’t necessarily have a favorite movie, per se, but was proud of her love for mockumentary television shows such as The Office and What We Do in the Shadows (which I am now hooked on). She also put much emphasis on her admiration towards Emma Stone and Rachel McAdams in regards to who she looks up to as an actress. “They’re just really versatile in their acting,” she said, “like they can play any part and it’s something I just really admire about them both.”

As big of a deal that being on Locke and Key is, it is also important to recount Nicole’s significant role in Boombats, a web series following a quirky and eccentric Italian family trying to navigate some peculiar circumstances, to say the least. In this series, Nicole plays the role of Gabby, the angsty, rebellious daughter of the show’s main character. When I asked her about how she landed this role, I was surprised by her response. “So with this one,” she explained, “the creator of the show, Tony DeSantis, reached out to my acting coach, Michael Caruana, and asked if he could recommend anyone to play the role of Gabby. Michael thought I was a perfect fit and sent Tony a few of my video reels. Soon enough, they contacted me and asked if I’d like to be a part of the show!” And a perfect fit she was.

“Now,” I began, “Gabby’s personality is very… uncaring and absent. On top of that, her relationship with her father seems strained. You, meanwhile, are from what I can tell super kind and approachable. How did you play this role so well and what was it like getting into her character?” With a laugh, Nicole nonchalantly replied, “Really, I just channeled my inner teen angst and went from there!” That got a long laugh out of us both.

As we talked more about her experiences with Boombats, one story seemed to be the source of most laughter and joy: the fight scene in episode two. I began by asking what it was like shooting such a chaotic scene, to which Nicole answered, “Well, the few clips of that scene only captured a fraction of the chaos that was going on on the set.” As she recounted the scene, a smile began to grow across her face. “The room we were filming in was, as you can see in the show, really small, but the worst part about it was that the air conditioning was broken that day, so we were all sweating like crazy in this cramped room. We were all pretty loopy. Meanwhile, Tony was entertaining us with his bizarre yet hilarious jokes on Italian culture. When the time came to shoot the ‘fight scene,’ we were all pretty tired by nonetheless finishing it with a big smile on our faces. It was really a great experience. Those guys are the sweetest people and I loved working with them.”

Fearing the worst, I went on to ask Nicole if there would be a second season of Boombats. Yes!” She replied, “it is definitely happening!” Needless to say, I was thoroughly excited by the news.

WARNING: Potential Spoilers for Locke and Key Ahead.

Now that our talk of Boombats was finished, it was time to delve into Nicole’s experiences on Netflix’s Locke and Key. “Let’s first talk about who Young Erin Voss is and how you nailed this role,” I suggested, and Nicole gave a brief explanation of her character. “Erin Voss is one of the original Keepers of the Keys. I play her younger self in scenes like flashbacks or when Dodge went into her head to find the Omega Key. It’s kind of complicated but basically Erin somehow got trapped in her head, leaving her seemingly brain dead in the real world. I got this role pretty much like how any other person gets a role in a show. That is, I walked in, auditioned, got a callback, and eventually got the part!

“So,” I said, “being on the set of a Netflix Original Series, I assume, is probably a bit different than being on the set of Boombats, yes?” “Oh, of course,” Nicole said, “They treated us really well (not that Boombats didn’t)! I even got a trailer all to myself, which was super cool. We were also flying back and forth from Toronto to Nova Scotia a lot so that was definitely memorable. Hanging out with the other Keepers of the Keys was also really fun. They’re all great people and we got along really well. We still keep in touch over a little group chat we made called ‘The Keepers of the Keys.’ We’re like a little family of the flashback people!”

At the mention of the Keepers of the Keys, we began talking about the flashbacks, namely the one in which Lucas, played by Felix Mallard, turns on the rest of the Keepers.

“It was another one of those all-day things. Before we got into filming it, they showed us our body doubles and how they did the scene. We also had combat instructors that showed us the moves or made it all as realistic as possible. That was one of my favorite scenes to shoot.”

As of last week, season two of Locke and Key is confirmed. It seems that with the rest of us, Nicole has been kept in the dark about the plot of the next season. “I really want to see the questions about Erin get answered,” she said, “like how did she get trapped in her head, how did she lose the Head Key, and whether or not she’ll be freed. I’m excited to see where the show goes with her as a character.”

In addition to her experiences on the set of Locke and Key, Nicole has also found much excitement and surprise long after her days of filming on the set of the show as more and more fans are showing their appreciation for her character. “I really did not expect to have fans now,” she elaborated, “I mean Young Erin Voss is sort of a smaller character so I wasn’t expecting to get much of a fanbase off of this. But it’s happening! People have been making edits of my character and it’s amazing. I even got my first fan page the other day and it was just so surreal.”

Nicole wanted to end her interview with a note of encouragement to her followers.

“Pretty much, no matter what your goals are, never give up on your dream. Surround yourself with people who are willing to support you and you’ll end up where you’ve always wanted to be. The hard work you put in will always pay off!”

Speaking with Nicole was a true honor. Whether it be an angsty teenager or a solemn protector of supernatural wonders, Nicole has found the greatest of pleasure in every role she has played. One could easily tell that each answer given was lined with pure joy for accomplishments as she lives her life doing what she loves most.

Did you enjoy reading Max Burlew's article? Let your friends know by using any of the sharing options below. Max Burlew is a first-year college student. He can be found on the weekends practicing guitar, writing poetry, or catching up on the newest Netflix Original Series. His favorite book is The Haunting of Hill House by Shirley Jackson.